Discontent teachers meet with speaker of parliament; education minister claims he respects the right of teachers to strike. 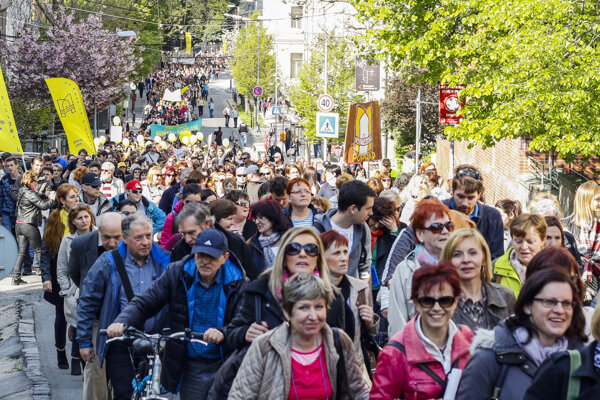 Several thousands of teachers attended a protest held in front of the Government’s Office in Bratislava organised by representatives of teachers and trade unions. Though they appreciate that some of their requests leading to improvements in the education sector have been included in the programme statement adopted by the government earlier in April, they are discontent with the proposed finances for the whole sector and inappropriate status of people working in education. The teachers later marched to the parliament.

The aim of the protest was to tell the government and the parliament that the situation in education is not as it should be.

“We want more finances to education,” head of school trade unions Pavel Ondek told the SITA newswire. He referred to the promise that the government will allocate €2 billion for the sector in following four years.

The trade unions currently do not plan further protests and will await negotiations, Ondek added.

The representatives of teachers and trade unions have signed a declaration, in which they claim that they lack the specification of finances that should go toward their requests which made it to the programme statement. They also disagree with the proposed increase in salaries of teachers, which should rise by 6 percent. The salaries of non-teaching professions are not mentioned in the manifesto at all, SITA wrote. 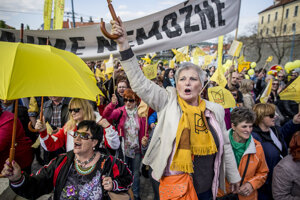 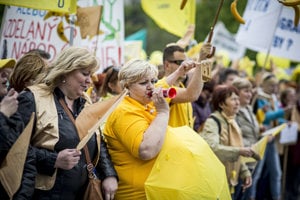 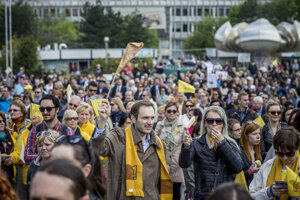 Protest of teachers on April 19 (9 photos)

The signatories of the declaration, however, ask for tariff salaries of teachers to be increased by 25 percent as of 2017 and then 10 percent every other year. The declaration also mentions wages for non-teaching jobs and for beginning teachers.

Though the government promises changes to be made during its current tenure, they are not specific and in fact do not promise anything, according to the chamber of teachers.

The representatives of teachers and trade unions also met with Speaker of Parliament Andrej Danko of the Slovak National Party (SNS). He said that the right to strike is undeniable, but he called for further dialogue, which should not concern only teachers’ salaries but systemic changes in the education system, such as change of powers and financing schemes, as well.

“I’ve said what’s written in the government manifesto, that is, we’ve prepared an increased amount of investments reserved for the education system and that we’ve made some steps towards hikes in teachers’ salaries on a gradual basis, which was drafted responsibly,” Danko claimed, as quoted by the TASR newswire.

“However, it’s important to say that everyone expressing their opinion is in part responsible for the future of education reform,” Plavčan added, as quoted by TASR.

The reforms at the grade school level emerged as a document drafted by almost 30 organisations, initiatives and school trade unions.

“This document, which was created based on a broad agreement, for the first time includes particular figures such as growth of €2 billion in funding over four years,” the minister continued. “It also includes wage tariffs for the first time, too.”

Plavčan finds the figures included in the document to be a necessary minimum.