Sulík to resign as SaS head on June 11

This way Sulík, who plans to run for the post again, wants to prevent discussions from damaging the party. 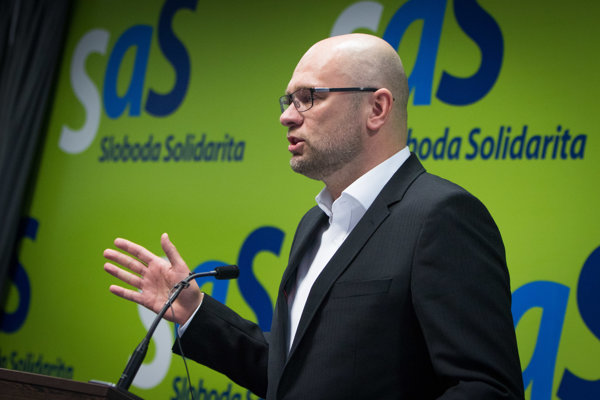 Freedom and Solidarity (SaS) chairman Richard Sulík will resign from the top party post at an extraordinary congress June 11 – only to throw his hat back in the ring for re-election immediately.

“The reason is not a division in the party, but a detrimental discussion in the media that is damaging the party,” said Sulík as cited by the TASR newswire, pointing out that a similar debate on the SaS leadership took place following the 2012 general election. “The situation when we were bothering people with our internal problems led to our voters’ support gradually shrinking in polls.”

At the same time, he announced that at the congress he’ll present his bid to be re-elected chairman for the next four years. If he is not elected, he says he will remain a rank-and-file party member.

SaS garnered in the March election 12.1 percent of the votes, becoming the strongest rightist party. Sulík, who has been the party’s leader since its inception in 2009, was considered a possible future prime minister; but incumbent Premier Robert Fico managed to put together a coalition of his Smer with the Slovak National Party (SNS), Most-Híd and Sieť. When his hopes of forming a coalition government vanished, Sulík resigned as MP. For the past two years he has been a Member of the European Parliament, which remains the case.

Some SaS members, for example Martin Poliačik and Lucia Nicholsonová, criticised the short period of time until the election of the new head arguing that it is too short time for a proper campaign within the party.

SaS was originally scheduled to hold a leadership election next year.