Paulo Coelho, a legendary writer, flew to Prague to celebrate life during the feast of St. Joseph, which he has been doing for years, and with a desire to meet the mysterious painter of his past, Slovak native Ivan Tomek. 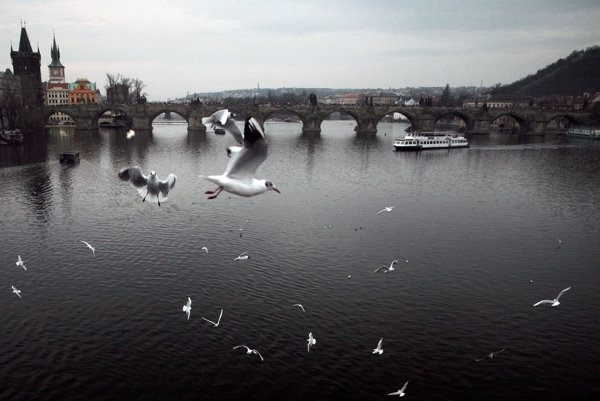 The best-selling author flew by private plane, took up a room in the most luxurious hotel of  Mandarin Oriental, sipped absinthe, walked with his friends of all races and nationalities and refused Czech translation during his speech. “It bounds my thoughts and everyone speaks English now,” Coelho said, as cited by the Sme daily.

Moreover, he emphasised that he did not come to Prague to promote books, do business or meet readers, but to celebrate life and fulfil some of his wishes. One of them was to find a mysterious painter whom he met in the Golden Lane of alchemists in Prague about 34 years ago.

“One Sunday morning in communist Prague, my wife and I went for a walk through the Golden Lane and noticed a lonely painter,” Coelho said, “I decided to buy one of his drawings which delighted him so much that he made a portrait of my wife.”

However, Coelho did not meet the painter during his last walk in Prague, and rather focused on the celebration of his life’s patron, St. Joseph, as he has been doing for the last thirty years in various locations around the world – for example in his native Brazil, Istanbul in Turkey, Santiago de Compostela or Prague. “When I was born the umbilical cord nearly strangled me,” Coelho said, “and as it was in the hospital named after St. Joseph, my mom thought that the patron saved my life.”

The celebration took place in the Lobkowicz Palace, the only privately owned building in the Prague Castle complex. Coelho greeted each guest with snapping a picture, served traditional Czech cuisine or exotic specialities and guests could also enjoy a cymbalist playing in one of the rooms. Suddenly, the crowd began to gossip that the biggest surprise of the evening was painter Ivan Tomek, born in the Slovak town of Martin, aka Coelho’s mysterious artist.

“Next to me appeared a quiet man who talked to me and I had a flashback,” Coelho said, adding that the painter enchanted him by his pure soul and lack of interest in publicity, “He just came to say hello and cheer me up.” When they embraced for the first time after years, Coelho burst into tears.

Paulo and his friends started the evening with a prayer, and continued with a five course dinner which lasted almost until midnight. As the writer could not bear sitting on his chair during the dinner, he moved from one table to another and entertained guests on his own. Later he took a microphone and showed his musical ability by singing the notorious song All You Need Is Love.

Coelho has won several awards, titles and honours for his literary creation and human-caring ideas, while his books are known by people in about 150 countries around the world. The Alchemist remains the most significant novel, thanks to which Coelho became the most translated living author of all time.