A greeting of stylised smiths

THE FIRST smiths appeared in Slovakia sometime in the 12th or 13th century, and some of the last could be found around the mid-20th century. 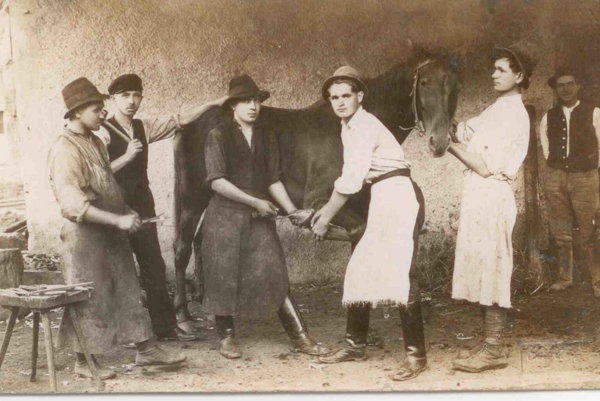 This is a traditional smithy, where blacksmiths worked in a hot forge and made horseshoes as farriers. Between the two world wars, this craft was on the decline as the role of horses as a means of transport was ever more replaced by railways and cars.

It is quite possible that the photographer who made the picture for this postcard was driven to the forge by his desire to capture something both uncommon and that was gradually fading away. As a visit of a photographer to a forge was probably not quite common either, this charming photo could be made: the blacksmiths seem to have been thoroughly prepared for the visit, putting on dandy hats while two of them were clad in snow-white aprons. All of them are carefully shaven and it even looks like the horse did not escape without some shaving either. Despite all the stylisation, the picture looks authentic.

Blacksmiths put horseshoes on horses but also on draught cattle. However, they also worked as vets.