Workers destroyed 66 nests of protected bird species when revitalising space under the SNP Bridge in Bratislava prior to Slovakia’s EU presidency. 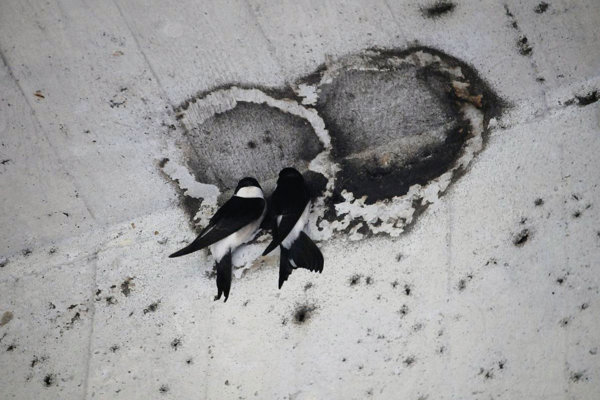 Pairs of common house martins are frenetically flying to and from the SNP Bridge in Bratislava. It is not because they, as in the middle of the nesting season, are feeding their ever hungry offspring, but because they are repairing their nests destroyed by inconsiderate workers when cleaning lower parts of the bridge. Nature conservationists describe destruction of the second largest colony of common house martins in Bratislava as a deed from the Middle Ages, while the workers defend themselves saying that nobody had warned them of the nests.

“We encounter similar extensive liquidation of colonies of common house martins very scarcely,” said Jozef Ridzoň, manager of the Slovak Ornithology Association BirdLife Slovensko (SOS/BirdLife Slovensko) as cited by the SITA newswire, adding that people rather asked them how to help protect common house martins and swallows. “Similar destruction of nests is something that belongs rather in the Middle Ages.”

On May 25 SOS/BirdLife Slovensko learned from observers that workers cleaning parts of the bridge over the Danube River with pressure washers are throwing down nests of common house martins. Just one week before SOS/BirdLife Slovensko checked this colony while working on a book which maps birds in Bratislava, concluding that there were no hints of danger or interruption to the nesting.

In total 66 nests, also maybe either with eggs or already hatched offspring, were destroyed. Thus the second biggest colony of this insectivorous and protected bird species in Bratislava was destroyed. The biggest colony currently lives on the Danube dam in Čunovo.