Slovak-made knife fourth in the world

Creative cutler Ladislav Lasky Šánta from the village of Hrochoť, central Slovakia, succeeded with the folding knife Pteryx L2 among hundreds in the competition American’s Gear Institute in mid-May. 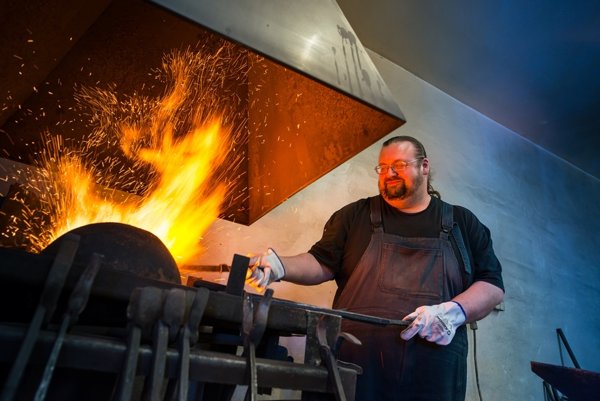 The competition consisted of tasks in both everyday situations and testing conditions, including cutting through rope, multiple sheets of cardboard or fresh branches without wiping the blade down. Moreover, stainless blades were left dirty and dunked in streams and salt water for at least 12 hours and dried in the sun. The locking mechanisms were also tested, Nasabystrica.sme.sk reported.

The Lasky Pteryx L2 is hand-built off of two skeletonised stainless steel handle scales with a very sharp burly drop point blade and a unique approach to one-handed deployment and locking, Nick LeFort, a freelance writer and design engineer known in the knife world as “Viking,” described the knife on the Gear Institute website.

In review on the knife, LeFort appreciated the materials used, the titanium locking mechanism, blade stamina and balance between blade and handle.

“Lasky didn’t go out of his way to focus on outlandish materials,” LeFort wrote, “he stuck to time tested materials and focused his efforts on the unique and highly functional design of the Pteryx L2.” 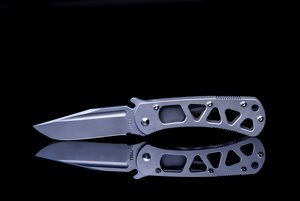 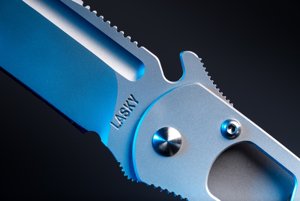 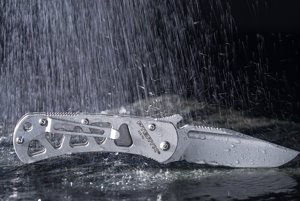 LeFort added that the choice to go with more familiar steels—such as Bohler M695 Extra, an improved form of 440C stainless—and an unnamed stainless for the scales shows a dedication to time tested materials over the temptation of newer boutique materials.

“This could prove risky in marketing and sales—but not in the quality of the knife,” LeFort wrote.

The size and locking mechanism of the knife required a bit getting used to when people use it with a single hand, LeFort wrote.

“However, once you realize its power, you will understand that it can slice apples, split wood or turn down a grizzly with very small effort,” LeFort wrote.

Lasky, born in Bratislava, first began to produce replicas of historical weapons for the fencing group Corvus Arma in 1993. Later he began to focus on knives and moved to Banská Bystrica. Now he produces mainly Damascus knives of his own design as well as custom knives, although he also makes stainless steel blades, swords and other weapons. His knives are in the hands of hundreds of satisfied customers including Charles, Prince of Wales.