Bratislava theatre-goers, both locals and visitors, get a chance each year to get a taste of other productions and enhance their connoisseurship. 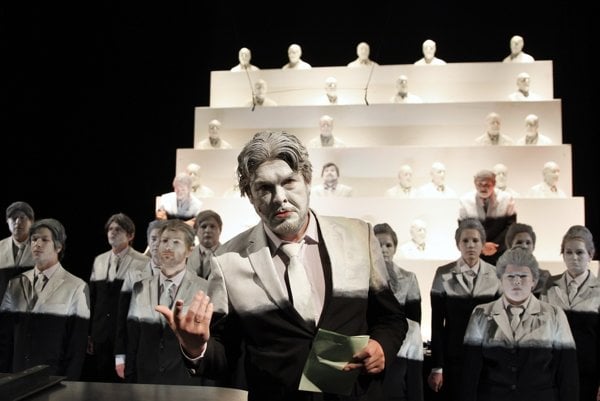 The Eurokontext festival marking the end of the season presents guest performances, with opera and dance offered this year.

After the host theatre, the Slovak National Theatre (SND) in Bratislava premiered Giuseppe Verdi’s opera Simon Boccanegra, the first dance performance of the Eurokontext 2016 was the Blood Wedding/Flamenco Suite by Antonio Gades company on May 21. The first part, more a fatal story of infatuation expressed through dance and body theatre was complemented with a “classical” traditional flamenco piece in which the performers and the audience struck a common chord and in the climax of the evening, the flamenco dancers of the company clapped the beat (inviting also the audience) and the musicians showed their mastery in dance, with the whole ensemble getting standing ovations. The fiery Spanish dance somehow fit perfectly into the historical building of the SND.

Of the operas, the progressive staging of two pieces by Dmitry Shostakovich, Orango and the Anti-formalistic Rayok, by National Theatre in Prague brought a rare image of the less-known and experimental paths of this genre. Orango, a fragment of avant-garde satirical composition of the Russian musician is based on a rare scientific feat when a orang-utan female was inseminated by human semen.

Shostakovich originally wrote it for the 15th anniversary of the Great October Revolution (which brought communism to Russia and surrounding countries) and for the Bolshoi Theatre. The unfinished score was found by British composer Gerard McBurney, orchestrated and performed in 2011. The Prague staging, played together with another of Shostakovich’s work, is directed by Slovak experimental artist Sláva Daubnerová. Anti-formalistic Rayok is a musical parody on Stalin and Stalinism, on all totalitarian regimes based on the personality cult, on pretence and on the leadership dictating everything including official art forms. Rayok is a word invented by the composer and used only in this context, meaning a bizarre fair promenading a freak show of politicians, officials and dictators. The two works are performed in Russian, with Czech and English subtitles.

The second opera performance on the evening of May 27 introduced to the Bratislava audience another Czech National Theatre, the one from Brno, also with twin works: the opera Epic of Gilgamesh by modern Czech composer Bohuslav Martinů, followed by Dido and Aeneas of English Baroque composer Henry Purcell. The two pieces, musically so different, are connected not just by the ancient myths at their roots and inspiration but also by the visual side, the stage concept and also costume design.

All four of these musical works represent uncommon, special dramaturgy and for the Bratislava fans of classical music also a glimpse into the world of less-known and less traditional musical stagings.

As the Eurokontext alternates musical and dance works with drama, audiences will get to see the drama plays next year. But by the end of 2017/2018 theatre season, visitors to this festival will again be able to see the crème de la crème of European musical and dance theatre.