Hlina says Christian Democrats "are back"

In a surprise, controversial politician chosen as new chief for once prominent party. 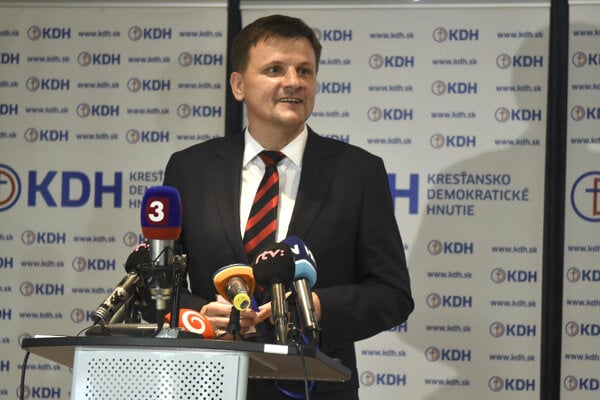 Alojz Hlina took over at the helm of KDH (Source: TASR)
Font size:A-|A+

Several centre-right parties chose June 11 as they day to elect their new leaders, but the analysts agree that the pick by the Christian Democrats was the most surprising.

The party elected Alojz Hlina, one of its newest members, to lead them for the following two years. Though there are many expectations, including returning the party to parliament, observers agree it will be hard to do as there are now many subjects with a similar agenda on the political scene.

“The conservatives are returning; the Christian Democrats are back,” Hlina said after being elected, as quoted by the SITA newswire.

Hlina won in the first round of the vote, with support from 223 delegates. The candidate with the second highest number of the votes, Eleonóra Porubcová from the regional parliament in Trenčín, received the support of just 85 delegates.

For Grigorij Mesežnikov, president of the Institute for Public Affairs (IVO) think tank, the election of Hlina was the least probable possibility, especially because he only joined the party in April.

“KDH used to prefer people who have been long-term members or functionaries of the party,” he told The Slovak Spectator.

His clear victory can be ascribed to several factors. Among them is the mood that followed the parliamentary elections in which the party failed to make it to the parliament for the first time since it was established in 1990, but also the dissatisfaction with the previous leadership. Moreover, the other candidates (Porubcová, Miroslav Král, Ladislav Štefanec and Ján Morovič) were weak, Mesežnikov opines. 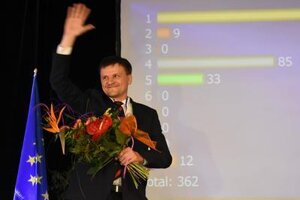 While support for the Slovak Democratic and Christian Union (SDKÚ) evaporated (it received only 0.26 percent of the vote), Sieť only barely made it into the house (winning the support of 5.6 percent) and KDH failed to reach parliament, with receiving 4.96 percent of the vote, political analyst Ján Baránek told the public-service broadcaster RTVS. According to him, Christian democracy in Slovakia “is in ruins”.

Political analysts addressed by The Slovak Spectator agreed that if KDH does not want to sink into oblivion and to return to the house in the future, they need to think about several changes, either to their image or their agenda.

Hlina will bring a change to the KDH structures, though Mesežnikov cannot predict what impact it will have on the party.

He has become visible mostly due to his non-standard communication strategies. Back in autumn 2012 he outraged the non-governmental organisations and the Government’s Council for Human Rights, National Minorities and Gender Equality with controversial statements made during a tour around Roma settlements, which he made with chair of the Ordinary People and Independent Personalities (OĽaNO) Igor Matovič. Hlina, for example, proposed to scrap the benefit mothers receive when a child is born, explaining that in some communities “the womb has become means of production”, as reported by the Pravda daily.

Back in 2014 he left OĽaNO, on whose slate he made it to the parliament in 2012, calling it “an ugly, stupid prostitute” after seven of its MPs had supported the constitutional law on judicial reform and protection of marriage submitted by the Smer party.

Though Hlina describes himself as a conservative politician and a Christian, it is not enough as traditional Christian democratic parties follow certain principles. Moreover, he has not profiled himself as a Christian Democrat yet, Mesežnikov said.

“There are big expectations from him, but I am not sure whether he knows KDH structures well enough to mobilise its inner powers,” he added, adding it will now be necessary for him to learn more about how the party operates. 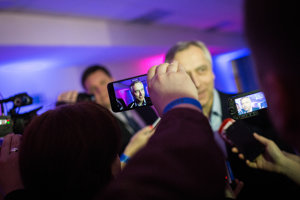 Examples from other countries

One of Hlina’s ambitions is to return the KDH to the political map.

“The conservative space in Slovakia is big and we will fill it as we are conservatives,” Hlina told the press, as quoted by the TASR newswire.

He would like to change KDH into a modern conservative people’s party. As for the main topics they want to push through, Hlina said that they will be specified during the programme conference. He however wants to focus on agriculture, Roma issues and consumer topics, SITA reported.

He also admitted in the interview with the Denník N daily that the certain links to Roman Catholic Church has harmed the KDH in the past, thus he wants to send out a signal they are not a narrowly focused party.

“So not only Christians, but also conservatives who are not Christians, vote for us,” Hlina told Denník N.

Mesežnikov says it will be interesting to see how Hlina will combine the new agenda with the traditional principles of Christian democracy. He opines that Hlina should look at other successful Christian democratic parties in Europe. One of them is the Christian Democratic Union of Germany (CDU) which has managed to attract a core electorate but preserved its programme.

“They focused on solutions and talked less about ideology,” Mesežnikov said.

KDH, however, will face also other problem as there are several conservative parties at the centre-right side of the political spectrum.

Among them, according to political analysts, is OĽaNO, but also recently established We Are Family led by Boris Kollár. The latter was also among the parties held election of its leadership on June 11. The members confirmed Kollár in his leadership position.

The only party to change its leader was the Party of Hungarian Community (SMK) which chose József Menyhart after three other prospective candidates had withdrawn (or had not filed) their candidacy.

The last party to hold election of its leadership was the current leader of the opposition, liberal Freedom and Solidarity (SaS) which re-elected Richard Sulík as its chair. He was the only candidate for the post, after his two rivals Jozef Mihál and Ľubomír Galko decided not to run.

“Sulík has clearly showed he has full control over the party,” political scientist Michal Cirner told RTVS, adding that the development of the situation before the vote only prevented the creation of inner opposition and strengthened his position in the party.