The parliamentary speaker is the most liked leader among the public; he also benefits from the bad reputation of his predecessor. 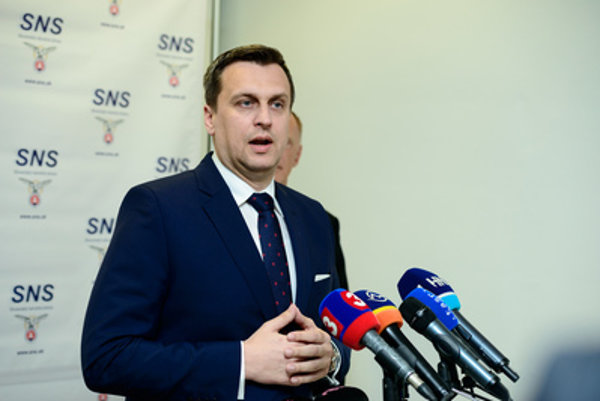 Speaker of Parliament Andrej Danko has even beat out the chairman of the ruling Smer party, Robert Fico, in poll gauging public popularity. One year ago, Danko was known mostly from the pre-election campaign, with a smile and a jacket over his shoulder, promoting the then-extra-parliamentary Slovak National Party (SNS). Three months after the general election, he is perceived as the most likeable politician.

Danko is popular despite the problem he has with phrasing sentences, or despite the criticism that he blocks parliamentary sessions with his power at which the opposition tried to recall top Smer representatives. In one or two election terms, SNS and parliamentary chair has the biggest chance to become the new prime minister.
Analyst Martin Slosiarik, of the Focus polling agency, opined for the Sme daily that Danko is able to win voters’ popularity also thanks to the bad reputation of his predecessor in the party, Ján Slota; scandals of his current coaliiton partners, the stated stress on Slovakia’s national interests – as well as to the fact that he will only be 42 this August.

“Because of his age between 40 and 50, voters perceive him as active leader who has, compared to Prime Minister Robert Fico, the advantage of being new in politics,” Slosiarik summed up.

Danko is perceived as a likeable politician by 50.2 percent of respondents of the Focus poll; followed by Most-Híd’s chairman Béla Bugár with 43.3 percent and Fico, with 36.4 percent.

Voters see Danko as the least repulsive politician, of the nine leaders of parties that made it to parliament.

“He is agreeable to look at and good to listen to,” export on communication Eva Martinovičová says. “He is always dressed formally and well-styled and makes an authentic impression.” She opined that SNS chair mainly draw support because of his light speaking tone and that he shows emotions.

Rather than his rhetorical style, voters perceive the fact that he is smartly dressed and makes the impression of a serious politician, Slosiarik said.

Compared to Slota, Danko gives genteel impression, has background without famous negative scandals and does not attack the Hungarian minority. “Nationalism in his interpretation is not vulgar, and people see it rather as patriotism,” Slosiarik added.

Danko also benefits from the state of ruling coalition when Fico’s Smer faces the Baštenrák scandal; some voters cannot forgive Bugár for forming a government with Smer and SNS, and leader of the Sieť / Network party Radoslav Procházka cannot keep his party intact.

Political analyst Tomáš Nociar points out that voters still perceive Danko as a new face in politics. He is also helped by his non-conflicting presentation. “Together with reputation that SNS has had in the long term, Danko is able to attract both mainstream and protest voters.”

Danko built his image on the fact that he seemingly stripped SNS of the connection with Slota. It was Slota who made him party first vice-chair in 2010. Two years later, Danko was elected chairman of SNS, and six months later, the leadership expelled Slota form the party for mismanagement.

Danko was several times the party nominee in Central Election Committees since 1997, he also worked as legal consultant for the party; and during the first government of Fico, he was assistant of SNS MP Rudolf Pučík. Before the election, he put on SNS slate people close to Slota and HZDS’ Vladimír Mečiar.

In the past, Danko sat on the bodies of suspicious security company SBS Dynasty. According to the alleged Gorilla file, intelligence service SIS long monitored the firm, over suspicions of illegal activities and cooperation of its owner Miroslav Guman with organized crime. Danko claimed he met Guman at the obligatory military service at the Defence Ministry where the latter worked, and that they have not seen one another since 2005.

Voters perceive Danko as one of top favourites for the chair of prime minister in the next, or the following election cycle. Today, he has the advantage – as Slosiarik argues – that also sympathisers from other parties accept him; unlike Fico. Also the voters of Sme rodina / We Are Family party included Danko in the three most popular politicians, as well as those of extreme right LSNS and Most-Hid which used to be a rival for SNS.

“The public sees Danko for example also through good relations with Most-Híd chairman Béla Bugár which voters in the south of Slovakia [where there is a huge Hungarian ethnic minority] may appreciate,” Slosiarik explains.

Although for Smer voters, Fico still holds 95-percent popularity, his weak point may be the scandals, long career in politics, or the fact that he divides people. Even 75 percent of Smer voters have a liking for Danko.

Another favourite for prime minister among the rightist voters could be Richard Sulík, head of the opposition Freedom and Solidarity (SaS), Slosiarik said.

Boris Kollár of We Are Family has also mentioned the ambitions of becoming premier. In the Focus poll, he ended up with 30 percent as the sixth most likeable politician, ahead of Igor Matovič of Ordinary People (OĽaNO), Marian Kotleba of LSNS and Sieť’s Procházka.