This is the moment to get TTIP done this year

Negotiations over the Transatlantic Trade and Investment Partnership (TTIP) are about to be wrapped up, still during the Slovak EU Council presidency. 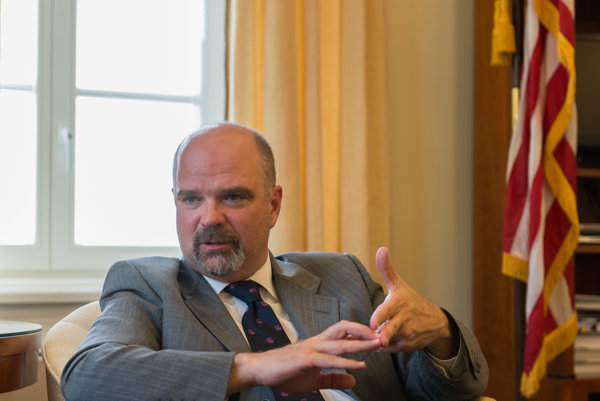 The Slovak Spectator spoke with the US Embassy’s Charge d’Affaires, Liam Wasley, about the shape the TTIP deal is taking and about how the talks will be influenced by the recent Brexit vote.

The Slovak Spectator (TSS): How will the outcome of the British referendum influence the TTIP negotiations?
Liam Wasley (LW): We are committed to going forward with the TTIP negotiations, regardless of internal EU decisions. This is a generational opportunity to build a modern trading system. Coincidentally, EU trade commissioner Cecilia Malmstrom is in Washington DC right now [end of June], meeting with Treasury Secretary Jack Lew and US Trade Representative Mike Froman to talk about this issue, to make sure we use the time to build a comprehensive deal that will make an impact on the lives of Europeans and Americans in the future.

TSS: Are there expectations now that Britain might have to lead separate talks on this?
LW: We are at the end game of the TTIP negotiations and we have a particularly strong political constellation on the American side. President Obama believes very strongly in it. Mike Froman has been part of this from its very launch. The US Senate, which would have to approve it on the US side, has also been part of the conversation all along. We have a political moment in the US to get this done this year. The EU’s discussions with the UK on its departure and its future connections will be proceeding in parallel to our final negotiations.

TSS: How do you perceive the negative campaign against the TTIP?
LW: There are different perspectives on the deal, some of which are not informed by reality. We still haven’t seen the final agreement, which will be clear on some of the elements. There are a couple of issues that I would like to flag. A potential agreement would be of particular benefit for small and medium enterprises in the US and all over Europe. In Slovakia, SMEs constitute 99 percent of all Slovak businesses. TTIP will allow small companies to have continental reach. We participate in a project called TransAtlanticTrade.sk, which includes six Slovak companies from different sectors, from five employees to 50-60 employees. They talk about how it will actually allow them to market their goods and reach different customers all over the world. TTIP will make customs procedures much simpler.