One day with Robert Fulghum 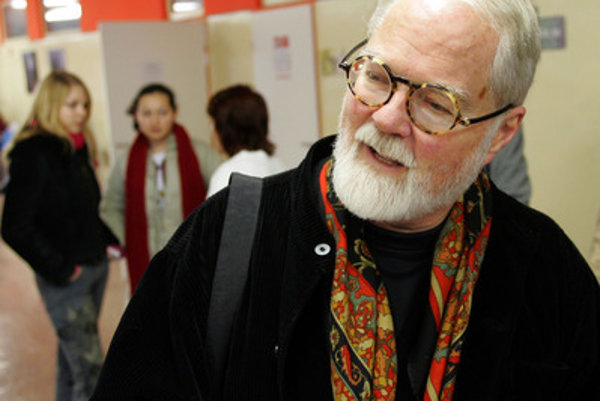 Writer Robert Fulghum has travelled the world; and so he has never been a person who cannot handle things himself.

Hardly anyone would suppose that the popular American will celebrate his 80th birthday next year. He moves so briskly and swiftly as if no laws of nature apply to him, and as if the heat was something that makes the day miserable for everyone but himself.

In Bratislava, he visited the reading corner At Red Cancer / U červeného raka where he had an autograph session and scenic reading of his book.

After putting his baggage into the car, we do not have to ask anything, he starts churning out stories by himself. During the short ride, he asks many questions about various things – how Slovaks perceive Brexit, whether we pay in euros, and what the weather is going to be like.

Robert Fulghum is an interesting and exceptional eccentric, discernible in just a few minutes. He looks like a magical grandpa from a fairy tale, and this is how his books are, too – magic, direct and witty, all at the same time.

Czech readers perceive him to be “their man”, his books are translated there as if on an assembly line, some of which have only been published in Czech. The Czech lands have grown close to his heart, he regularly returns and recently he spent several weeks on a literary tour accompanying his latest book Crisis in the Cheese Aisle, in which he visited, together with members of the theatre-literary project Listování almost 40 Czech sites, and even made a stop in Bratislava within that tour. But it is not the first time he has been to Bratislava.

“I was here about five years ago, at an autograph session, and I spent several days here. But the first time I was here was even before the Velvet Revolution,” he recalls on his way to lunch, The only criterion for selecting a place to lunch is that he does not have to eat dumplings and knedľa – a typical Czech meal he has allegedly had enough of.

Although literature has been a part of his life since childhood, he became a writer only after he turned fifty. Until then, he was a parson and a barman, graduate of several colleges and world traveller.

“Writing is like an illness – I cannot get rid of it,” he says. But apart from writing, he also has time to play in a marching band, a rock’n’roll band with other writers, for example Stephen King, and he even regularly dances tango.

People in the streets of Bratislava and Prague are just the same as elsewhere in the world, Fulghum notes. Everyone wears flip-flops or sneakers, girls wear their trousers rolled high and T-shirts with signs. Universal fashion, he evaluates.

He has a well-trained instinct for observation. He notices that no child is in the queue for ice-cream. There are smartly dressed young girls, older couples, but not a single child. Most children are scattered all around for vacations, mostly with grandparents, we explain to him. A very nice habit, he comments, and gets up from the chair.

He keeps the curious soul of a child

Have you seen the film on the Danube? Is there a lot of traffic here? What is that strange building on the embankment? And that tall one across the river? Instead of asking him questions, he showers us with them.

He watches a man who sells coffee behind a functional bicycle – just look at all the equipment he has to ride every day, he points out details. The writer watches the river and ships floating passed; consider the special angle in which the elevator in the famous Bratislava  café of atop a suspended bridge must ascend. He is fascinated by every little detail as some young country boy who sees the hustle-bustle of a city for the first time.

We do not ask him anymore whether he is not tired, whether he does not want to rest a bit. We walk along the Danube and muse on the stories from his books. He allegedly never writes lies; everything in his books is true – and if not, it should be, or at least could be, says Fulghum. “But I never tell people how they should live. I just hint to them what I have noticed: it is like writing a letter to a friend.”

He never stops listening to people

When we finally get back to the reading corner where the late afternoon programme is to take place, signs of fatigue can be seen in him.

The first eager readers look in his direction. He remains hidden in the shadow for now and waits for his Czech colleagues who will perform a piece from his book Hold Me Fast Love Me Slow. He has seen it already 43 times and even though he does not understand Czech, he is always amused by actors dramatising his words onstage.

Clouds are gathering but it seems that Robert Fulghum is not easily discouraged. Unsurprisingly, he first takes several photos of the audience. “After the performance, I can sign anything for you – even a pregnant belly.”