Extremist Marián Magát already had incidents with the police, but has never stood trial. 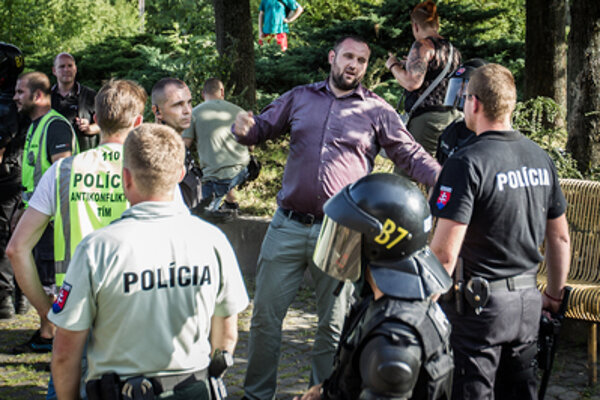 Marián Magát, the MEP candidate for Slovak People’s Party (SĽS) who also ran on No 88 on the slate of Kotleba-ĽSNS in the recent general election, faces charges of unauthorised carrying of weapons.

The charges were filed by prosecutor at the District Court in Čadca, the Pravda daily wrote on July 30. Last year, Magát was detained by police  for procuring without a license and keeping a short handgun, a repeating revolver, at a house in Turzovka. Magát claimed he found the gun and wanted to hand it over to police. In convicted, he could face up to eight years in prison.

His friend Michal who also has concealed gun with a removed serial number  – and also threatened a woman – already pleaded guilty and struck a deal with prosecutors.

On July 25, the prosecutor of District Prosecutor’s Office in Čadca filed a laswuit against Marián M, charged with illegal arming and arms trading,“ Regional Prosecutor’s Office Žilina spokesman Milan Cisárik, informed the daily. “This suit will be handled by the District Court in Čadca.”

So far, Magát was only charge in the Czech Republic of the crime of inciting hatred against a group of people and of constraining their rights and freedoms, for his speech at a meeting last August in Prague. He used the Nazi greeting "Na stráž!," typical for Slovak Hlinka’s Guards in the wartime Slovak State. He also caused uproar before the 2016 election with his billboards and statements on social networks. This is his first official prosecution in Slovakia, however.