City games are based on a principle similar to escape rooms, from which players have to get out by solving original interactive puzzles during a certain time limit. 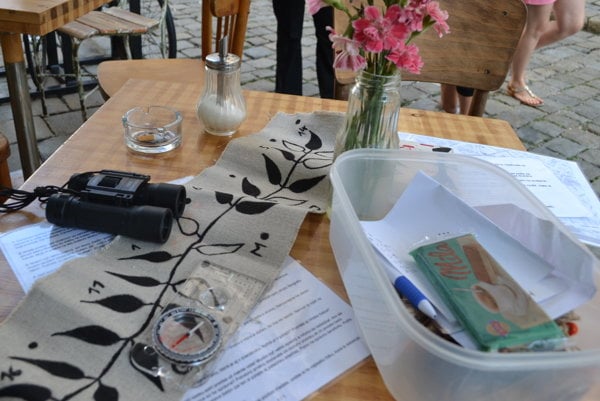 Players get a box full of helpful devices to use during the game. (Source: Martina Chudá)
Font size:A-|A+

THERE are several ways to discover a city. Apart from traditional sightseeing it may be also via city games combining elements of geocaching and escape rooms. This way tourists or Bratislavans can discover places in the city previously unknown to them and learn interesting information in a playful way.

“For tourists, games are an original opportunity to get to know the centre of Bratislava in an entertaining way instead of a classical sightseeing tour,” Emil Haas, one of the creators of such a game in Bratislava, told The Slovak Spectator.

City games are based on a principle similar to escape rooms, from which players have to get out by solving original interactive puzzles during a certain time limit. In city games the players are looking for markers on city streets to meet their missions.

Visitors to Bratislava or its residents can already choose from several options. Peculiar Bratislava takes its participants to various non-traditional places while in the City Game of the agency Brainteaselava the mission is to find out what has happened with student Viliam. He is being chased by the ŠtB secret police taking place during the times of the previous totalitarian regime. When creating the game its authors drew inspiration from city games students of the Gymnasium Grosslingová in Bratislava, which they attended too, prepared within school games, but also from games they organised for kids in summer camps. They also looked at similar games in Slovakia and abroad.

“But many of them have tasks to solve either too straightforward or, in contrast, based on a relatively complicated encryption,” said Haas. “But we wanted something more interactive and suitable for beginners as well as experience players.”

They chose to set the game during the time of the previous communist regime and got the former intelligence service ŠtB involved because they wanted to embed into the game a story that would be easy to remember and that would be not too limiting when making up individual tasks. For example, if the story took place during the Mediaeval Ages, using modern devices would not fit.

“Most players like the plot or they do not perceive it at all when swallowing the tasks,” said Haas, adding that young people know only little about this period of time and thus the game is an opportunity to provide them with some information in a playful way.

City games can be played by teams and their organisers usually offer versions for team-building activities. The City Game is available in Slovak and English and the organisers are considering adding more language versions.

Weather usually is not a determining factor even though Haas admits that bad weather may prevent people from wandering around the city.

Based on the participants so far, mostly young people between age 20 and 40 play the City Game while the agency Brainteaselava has also involved families with children or middle aged people.

“Reactions are very positive; they like not only the tasks but also beautiful sights or the interesting information or legends they learned during the game,” said Haas.

The goal of the City Game is to find out what has happened with student Viliam within a three-hour limit; the participants get a rucksack with instructions, a map and a box with devices like a flash light, a string, and compass to use when solving individual puzzles. On average the players complete it in two and a half hours.

“We had one group which wanted to achieve a record and did it in 64 minutes,” said Haas. “An opposite record was about five hours – thanks to five beer stops.”

During the game the organisers follow individual players via a GPS locator and in the event of need they can intervene and help.

“It happened one time that one group took a tram into Karlova Ves and stopped picking up the phone,” recalled Haas. “Because the game takes place only in the historical centre, I was wondering whether they gave up and forgot to return the backpack... In the end it turned out that when the group realised that it had in the backpack with things for the game a GPS locator as well, they made a fool of us this way.”

The author played the City Game as member of the Sme daily team at the invitation of the agency.