The schoolchildren from first to seventh grade were training from the beginning of 2016. 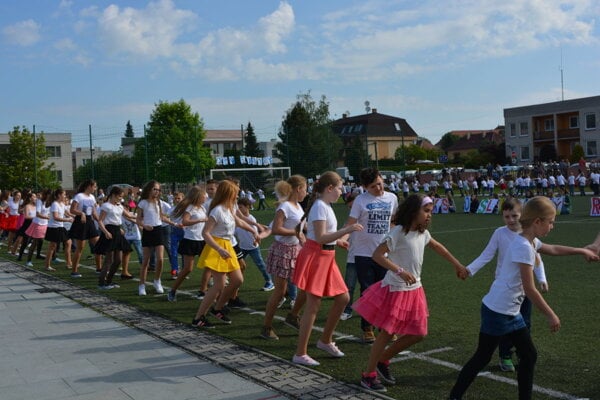 Students of the primary school in Nové Mesto nad Váhom in Trenčín Region will try to be inscribed in the Book of Slovak Records as 350 children created 175 couples to perform a Belgian dance at the school’s playground in early June 2016.

Previously, the Slovak record was held by the recreation centre in Svit where 200 registered dancers participated, the Sme.sk website reported.

The schoolchildren from first to seventh grade were training from the beginning of 2016. They have been dancing during their music and PE classes, for several times a month. Students from the eighth grade helped with promotion, said teacher Janka Sokólová.

“We originally thought the first-graders would not manage the dance,” Sokólová told Sme.sk, adding the teachers did find a way to instruct them.

The school picked the Belgian dance to commemorate the 12th anniversary of Slovakia’s accession to the European Union whose headquarters is in Belgium, explained the school’s headmaster Michal Hnát, adding that the EU was created with the aim to unite nations, people and cultures.