In this photo from 1909, a band from the region of Šariš is posing. According to the plate one of the musicians is holding, it is clear that the picture was taken somewhere in Bohemia. 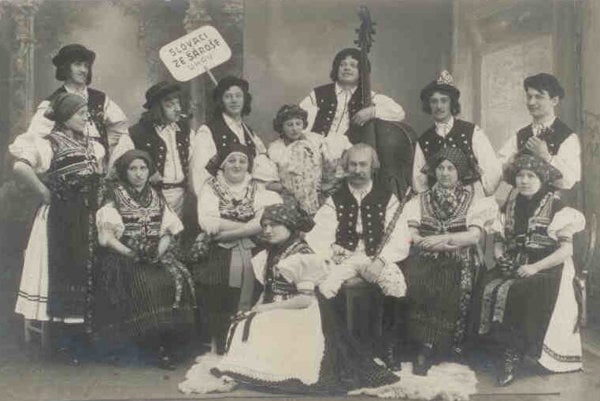 The plate is written in Czech and the homeland of the musicians is stated as Uhry – meaning Great Hungary in Czech. It also implies that the band came from north-eastern Slovakia, from Šariš.

The music of Šariš is widely-known in folklore to this day.

Just as well known is the Šariš “krucena” dance as well as the dancers who put spurs on their boots to stress the rhythm – which then tingle when touching each other, or stamping.

The musical dynamics of Šariš have been created throughout centuries and the claim that the first big wave of colonisation from Wallachia is behind it seems not to be wrong. Nomadic shepherds started arriving to Spiš by the end of the 14th century and apart from cattle and sheep herds, they also brought their vivid music along.

Wallachians – Ruthenians, were also joined by other inhabitants of Šariš who liked to sing. Slovaks, Ukrainians, Germans, Jews and Roma – they all have contributed their share to the unique musical style of this region.