A participant of the summer Slovak language school talks about his interest in Slovak literature, in the country itself, and the challenges of translating. 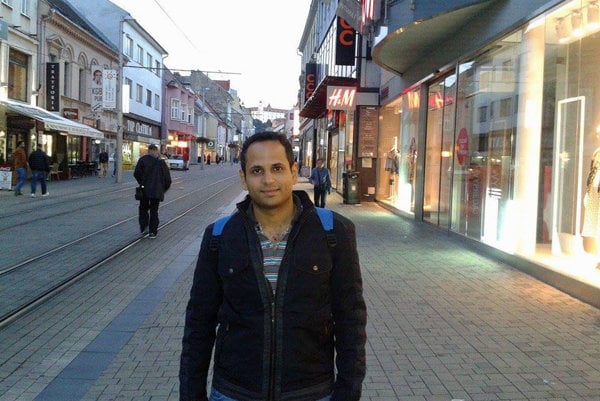 “If you are learning a language and have never visited the country, you have not learnt anything,” says Ayman Saad, a university teacher and lecturer from Egypt, who translates Slovak literature into Arabic.

Ayman was one of the participants of the Studia Academica Slovaca (SAS Summer) School at the Comenius University in Bratislava, offering courses in Slovak language for foreigners. Apart from study, he took the opportunity to get familiar with Slovak culture and people.

The Slovak Spectator (TSS): Why did you decide to translate a book of Slovak short stories?
Ayman Saad (AS): I like Slovak literature and I enjoy reading it. Initially, I was searching for Slovak literature on the internet, just to read it and improve my language skills, and I found a few really good books, including a collection of short stories Dvanásť poviedok a Ján Med, by Jana Beňová. The next step, I think, should be to translate them so that people in Egypt can read them too.

TSS: Do you plan to translate also other books from Slovak? What kind of books?
AS: Next I want to translate Babylon by Margita Figuli, a novel written in the post-war era but set in the Biblical kingdom of Babylon.

Also I would like to translate some classical books. I think that classical books will outlast the new literature and blogs, where anyone can be a writer. Classical works required more dedication and thinking in order to put all of those ideas together.

TSS: What is your occupation and how did you get into translating literature?
AS: I am a university teacher at the Ahram Canadian University in Egypt. I teach general English to students of different faculties: pharmacy, engineering, business administration, mass communication. Also, I am a translator, specialising in translations of literature.

TSS: You completed your studies (in Egypt) in English and Czech language. Why did you choose this combination?
AS: Studying English is common in Egypt, because it facilitates looking for a job. I preferred the other language to be something not so common and I thought that Czech would be nice. Studying Czech helped me to learn Slovak later.

TSS: How did you get to Slovak language?
AS: I have been interested in Slavic languages for about 10 year. After learning Czech, I started self-learning Slovak.

TSS: You have participated in summer courses of Slovak at the Comenius University several times. What are your impressions of Slovakia and the people?
AS: For sure, it is a very nice country. I think that it is getting better every year, as I attend the course. I can see improvements in the streets. The people are very kind and very nice. If I need help in the street, they help me.