The original idea was to make Panenská Street more visible, to clear it of cars and create space for meeting people. 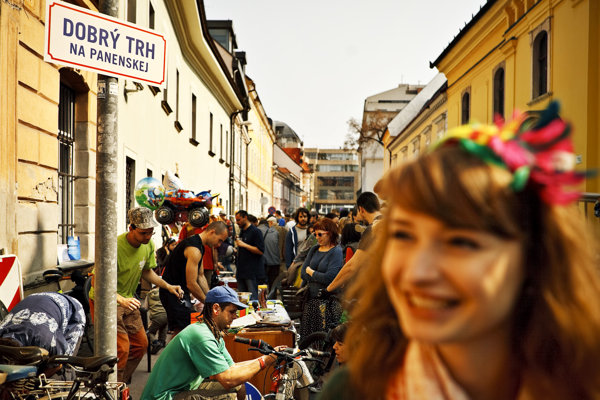 When Barbara Zavarská and Illah van Oijen, who are behind the project of Good Market or Dobrý trh in Slovak, decided five years ago to organise the first Good Market at Panenská, they started with 20 stands. Over the following five years the Good Market has grown and expanded into other parts of the city. Now they organise three Good Markets annually – at Panenská, at Jakubovo Square and in Old Market Hall and its nearby streets.

At the anniversary market on September 15 visitors will be able to buy hand-made and design pieces or food at more than 150 stands, learn new skills at workshops and listen to the music programme at the courtyard of the local music school. Or they can watch a discussion about multiculturalism or enjoy the speakers corner prepared by the Festival [fjúžn] in cooperation with the Denník N daily in the Next Apache café. Of course visitors can also just enjoy the market and its atmosphere.

The original idea of the organisers of the street market was to make Panenská Street more visible, to clear it of cars and create space for meeting people, in addition to getting neighbours involved in the activities.

“We are pleased that more and more local organisations have been joining in,” said Zavarská from the civic organisation Punkt. “For example, the music school ZUŠ M. Ruppeldta is opening its courtyard for concerts. Equally also cultural institutes of Austria, Hungary and Germany are joining in too as well as the bookshop Artforum and small local shops.”

When starting with the Good Market, its organisers hoped that it would be people living in this area who would cook and bake and then sell their creations at the market. But the Slovak legislation is quite strict in this respect. On the other hand, this has pushed those who wanted to sell at the market to meet the conditions.

“This has helped many of them to begin doing their business in a professional way,” said Van Oijen.

In order the Good Market can take place at all, the local residents or business people must park their cars elsewhere during the day of the market. The organisers admit that at the beginning it was difficult for each locality. But people have gradually gotten used to it.

“We are still working on this because we actually interfere with the freedom of the usage of public place,” said Zavarská. “But during the Good Market at Panenská we secure alternative parking at the courtyard of the conservatory at Tolstého Street.”

Moreover this year the Good Market will be a warm-up before the Week of Mobility starting on September 16. Also this event supports the idea of alternative transport.

When the toastee hands down presents

Even though it will be the Good Market who will celebrate, it will not receive but rather distribute presents.

“Our present for Panenská is a detailed map of the neighbourhood that we will launch at the Good Market,” said Van Oijen.

The map depicts the historical and cultural richness of not only Panenská but also nearby streets. It will advise where to shop, where to go for a coffee, what schools, libraries and multicultural institutions or churches are here. It tells stories of local buildings and institutions but also the local lime tree more than 1,000 years old. It is accompanied by a brochure with interviews with residents and people who work here or are in any way connected with this place.

It will be initially published in Slovak but the idea of the organisers is to have it also in English, German or Hungarian.

“We would like the map to serve the local community as well as it to be handed out in local shops, cafés and institutions to inspire people to return,” said Zavarská.

Where to discharge a roll from toilet paper?

The organisers of the Good Market have traditionally prepared various workshops at which their attendants can learn to draw, animate or design things from non-traditional materials. These are for children as well as adults, but it is necessary to enrol in advance.

This year the Good Market will have a special focus on waste. At a workshop for adults Ivana Maleš from the Institute of Circular Economy will show various and useful ways how to process materials which would otherwise end up in mixed waste.

“For example, people will learn that a paper roll from toilet paper should not go into a bin for old paper,” said Van Oijen. In the Netherlands, her home country, separation of waste and its further processing is a big topic.

The Good Market will start at 10:00 and end at 17:00. And even though it lseems like a short time, the organisers have a reason for this. They do not want possibly intoxicated visitors to bother local residents and this is why they are focusing the programme especially on family.

“It also happens that joined producers sell out their goods already in the middle of the day and thus for many of them it is then difficult to stay at the market until its end,” said Zavarská. “But the joined cafés or pubs organise after-parties.”

Another very prosaic reason for closing the market at 17:00 is the time necessary for cleaning as also in this aspect the Good Market wants to be sustainable and thorough.

“The Good Market ends at 17:00 also in order we have time to clean up everything while there is light,” said Van Oijen. “Often we give back the street [back to its residents] cleaner than it was before.”