Kiska: Every modern country should help in migration crisis

The president also plans to support the candidacy of the Slovak foreign affairs minister for the top UN post during his visit to New York. 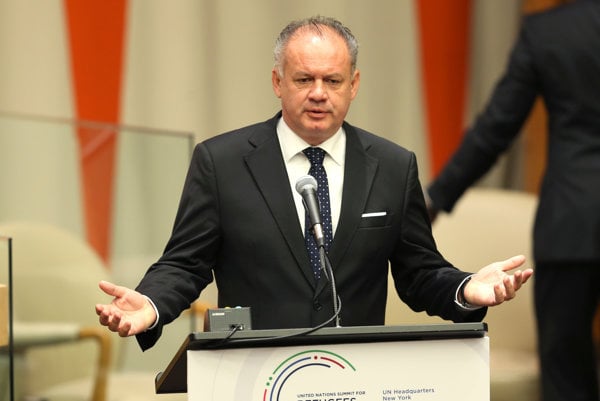 The migration crisis has been the biggest problem since the end of World War II, said Slovak President Andrej Kiska in New York, where he leads the delegation at the 71st session of the UN General Assembly. It should be the last UN meeting where US President Barack Obama will hold a speech.

The president is glad the forces are united. It is a moral duty of every modern country to think about how to help, he added, as reported by the TASR newswire.

Kiska was responding to the September 19 refugee summit at which the UN and the International Organisation for Migration (IOM) signed an agreement, making the latter a related organisation of the former.

Kiska also plans to support during the visit (September 19-21) the candidacy of Slovak Foreign Affairs Minister Miroslav Lajčák to the post of new UN secretary general.

“We are doing everything we can,” Kiska said, as quoted by TASR, adding there are still things that cannot be affected.

He considers Lajčák an experienced politician with high chances to succeed.

Slovakia tries to do something regarding the immigration policy, though it is hard, Albright said, as reported by TASR. Since the country currently presides over the EU Council, it has to cooperate with the others to make the system work, she added.

“I think it has to be better arranged so people who come do not live like animals, but can work,” Albright said, as quoted by TASR. “Every country has to do something.”

During the first day of his visit, Kiska also held a speech at the meeting organised by current UN Secretary General Ban Ki-moon, which dealt with the refugee crisis. He then met with the presidents of Bulgaria, Slovenia and Senegal, as well as the prime minister of Georgia and the UN High Commissioner for Refugees.