The so-called gradual strike means increasing the number of lessons dropped by dissatisfied teachers each time, if their requirements are not met. 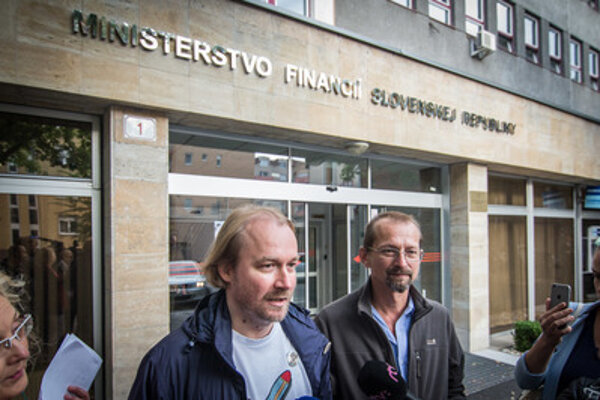 Crmomna and Kočan in front of the Finance Ministry. (Source: SITA)
Font size:A-|A+1

The dissatisfied staff want salaries for teaching and expert non-teaching staff at primary and secondary schools to be increased across the board by €140 per month this year and by another €90 per month as of 2017. As well as this, the budgets of the ministries of education and interior should be increased by €400 million in order to make it possible to eliminate gaps in terms of the equipment available to individual schools.

A total of 2,000 teachers from 150 schools joined the strike on September 21, representatives of the organiser, the Slovak Teachers Initiative (ISU), told the TASR newswire. This time they refused to teach two lessons.

Teachers from all regions of Slovakia have joined the strike, with Bratislava, Banská Bystrica and Žilina having the highest level of representation. In total, there are around 6,590 schools (of all kinds) and over 71,500 teachers in Slovakia. 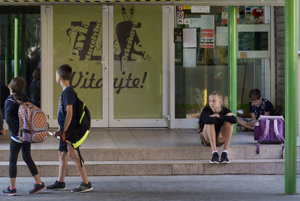 ISU representatives gathered in front of the Finance Ministry to point to the fact that Slovakia is lagging behind in terms of investment in education. They referred to analyses by the Financial Policy Institute (IFP) that deal with the need to boost funding for the education sector. The first commentary on the issue was published in 2011. “The document states that investment in education is one of the most profitable investments for both an individual and the whole of society,” said Branislav Kočan of the ISU. The next IFP document regarding the issue was released in 2012, when the institute claimed that high-quality primary school education could lead to increases in GDP of around 9 percent per year by around 2050.

The ISU also stressed that only 10 percent of teachers are under 30. “This attests to the lack of motivation among young [potential] teachers to enter the education sector, with the number going down over the past few years,” added Vladimír Crmoman of ISU. He also noted that dissatisfied teachers have not yet received any signal concerning talks from the government. However, they are still ready to negotiate.

Dissatisfied teachers again described the strike as successful. They expect to be joined by still more of their colleagues. In several towns and cities, strike groups went to the vicinity of schools that had not joined the action and distributed leaflets and documents among the teachers there to win them over. There were totally 50 schools where the participation of teachers in the strike was 50+ percent, the SITA newswire wrote.

Education Minister Peter Plavčan (a Slovak National Party-SNS nominee) has already reacted to the strike, noting that teachers will receive increased salaries as of September. He also said that he is yet to hold talks with Finance Minister Peter Kažimír on increasing teachers' salaries in 2017.

The gradual strike started on Tuesday, September 13, when 1,773 teachers from 106 schools refused to teach one lesson on that day.

If the situation does not change, three lessons will be dropped on September 29.