Team Europe had been previously considered an outsider at the Hockey World Cup, defying even experts. 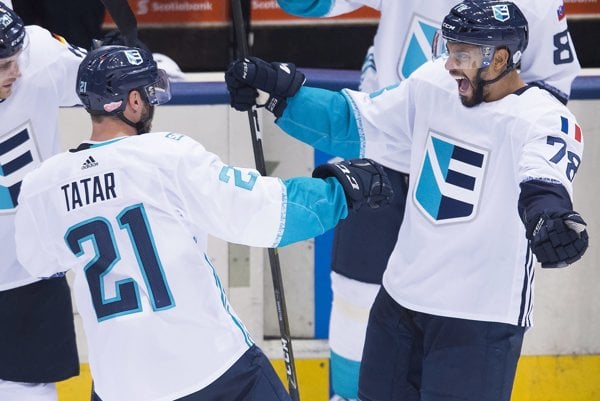 The team put together from ice-hockey players from eight different countries continued its surprising winning spree, beating Sweden 3:2 in overtime.

In the match taking place on September 25, Slovak players dominated. The goalie, Jaroslav Halák, again performed excellently when he caught 37 Swedish shots, and Team Europe goals were scored by Slovaks Marián Gáborík (one) and Tomáš Tatar (two, including the winning one, in the fourth minute of extra time).

“This is wonderful,” Tatar, deemed the best player of the match, said as quoted by the TASR newswire. “We were self-confident all the time and fought for each other. The team in the cabin is really brilliant. We proceeded to the finals and thus closed the mouths of those who were against us and said we were outsiders,” he summed up.

The performance of Team Europe is a big surprise also for hockey experts and betting agencies. “We are happy and very pleased about what we have achieved,” Marián Hossa rejoiced. “I don't think anybody guessed we would be participating in the finals. The odds were 33 to 1, and that is exactly why we are now enjoying great feelings. Each one of us is very happy,” Hossa told TASR.

The biggest surprise was, according to TASR, how quickly players were able to coordinate, despite not being connected by origin, national feelings, or mother tongue. They are the only team at the World Cup that does not have its own anthem.

In the finals, the team will meet the biggest favourite – the Canadians. The struggle for the title will end after two winning matches by either team, starting with the first duel on September 27. “We have to put everything into the finals matches against Canada, and we will see how it ends,” goalkeeper Halák said for TASR. “It will definitely not be easy, as they have no weak point in the team. We have to prepare for that.”

Global media also praised Team Europe – as well as the idea to put together a team of national players who wouldn't be able to dream about competing, not to mention winning, in national teams of individual countries.