Theatre festivals offer a wider view of trends from around the country and abroad. Divadelná Nitra, the first international drama festival in Slovakia, has been doing it better than anybody else for 25 years. 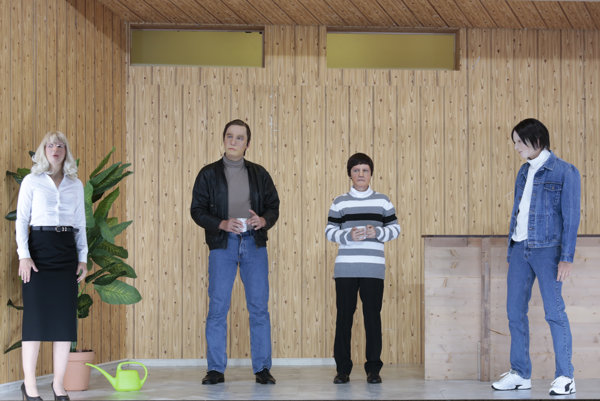 In 2016, the programme of this Nitra-based event may seem a bit more lean, but it still includes a selection of domestic and foreign plays, performances and other theatre genres. Almost ll of them bear a significant social message and disquieting ideas.

The anniversary was also a good pretext to commemorate the previous years of festival – be it through older bulletins, an exhibition of posters and photos, and the book Desire Alive for Beauty / Túžba živá po kráse mapping the festival’s history in both Slovak and English across 300 pages.

The present programme officially began with the intriguing performance of Munich theatre Münchner Kammerspiele, “Why Does Herr R. Run Amok?” The piece cites German director Rainer W. Fassbinder as well as period style, fashion, design and TV programmes and was directed by iconic director Susanne Kennedy. Lasting for two hours on September 23, it flowed at an intentionally slow pace, portraying the true motifs of the “ordinary man” whose everyday life in the German middle class grows so unbearable that but also offering a picture of this 1970s environment; and at times, causing the audience to almost run amok. 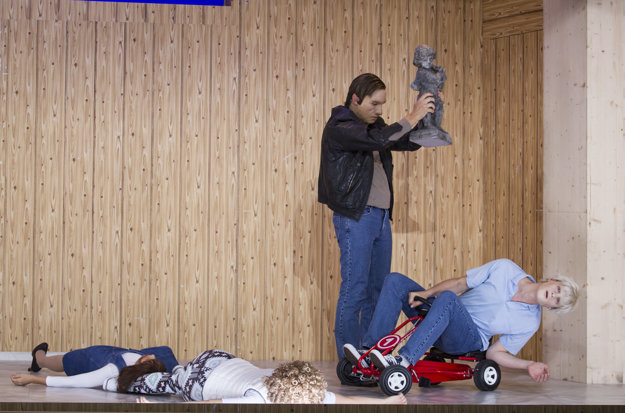 The piece itself – in which characters wear masks and are dubbed over with voices of strangers – is interspersed with short video-sections that sometimes seem more real than the life onstage: first there are no masks, and they are played by elderly amateurs, which only increases the impression of “reality”.

Other foreign performances are characterised by strongly artistic form, like the Ukrainian happening by Dakh Daughters Roses, or the body performance “Pillars of Blood” by Sweden-based troupe Iraqi Bodies.

A fragment of Dakh Daughters, a project of theatre director Vlad Troitsky and his Dakh Centre of Contemporary Art, already performed at the Slovak music festival Pohoda in 2015, but in Nitra, the full cast appeared – and showed not only their musical skills, swapping instruments and rotating as lead vocals, but also offering a great show with unforgettable costumes and impressive choreography. The visual side of their performance was unusually demanding, with the short videos changing styles from folk ornaments, through allusions to Hieronymus Bosch, to Terry Gilliam-style animations. The lyrics of their songs were based on folklore, French chansons, Rudyard Kipling, Charles Bukowski and William Shakespeare; but all re-made and revived under the influence of Ukrainian ethnic culture and contemporary art. 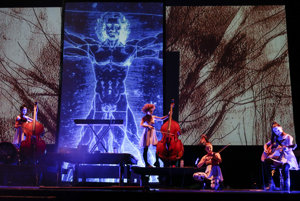 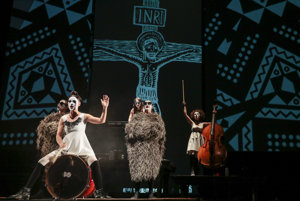 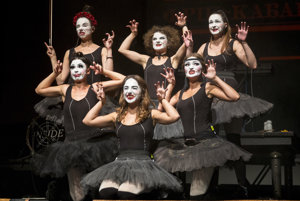 The musical style and the range of pieces performed was also impressive, and the subtitle of the evening “Freak Cabaret” was quite deserved. Some people already knew what was coming to them, but even the unwitting reacted very vividly and the classical theatre of Andrej Bagar in Nitra probably saw for the first time such atmosphere of football stadium, or a huge open-air festival.

Troitsky said that the production was born at the Gogolfest, stemming from the school of non-theatrical art, and exploiting the possibilities of cabaret. “The first and most necessary thing is love,” director said of the collective creation by the Dakh Daughters.

“Of the two ways, I work in a way that I never know what I want, and I set on a trip, but with common background and history with the girls comprising the band. Our work must include love inside, open heart, and inherent irony,” he said, adding that the topic of the latest programme is Babylon, the archetype of failed project.

The evening performance on the same day, September 24, “Pillars of Blood”, was a different cup of tea: a minimalistic, absurd physical theatre involving also metaphorical, physical text and symbolical props like boxing gloves, stilts, or a burqa. Both these pieces were political, but in a refined, indirect way; despite, or maybe thanks to, the conflicts, civil wars and tragedies that are hidden behind their stories. The story of Ukraine is known well enough, and it can be felt also bubbling under the surface. However, because of t this finer, indirect expression, raising the national flag in the end was maybe a little too much. 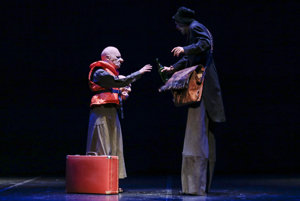 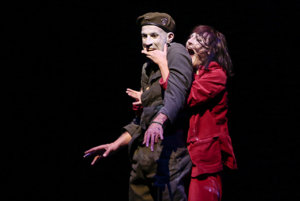 Iraqi Bodies started as a project back in their homeland, but after one member was killed and director Anmar Taha was injured in a religiously motivated attempt to silence them the project moved to Sweden and further developed the original aesthetics of the dance performance – but resisting the temptation to resort to direct and simplistic expression.

The Czech play on September 26, “The Hearing,” was closer to classical drama, with a hefty use of documentary materials and historical facts. The Aréna Ostrava Chamber Theatre performed a trilogy looking back to two totalitarian regimes – the Nazi and the communist – and interlude which expelled all Germans and Austrians after World War II.

The middle part, “The Hearing,” is a fictitious apologia of Nazi criminal Adolf Eichmann to another prominent of the Fascist era, Hans Frank. They try to explain their points and wriggle out of guilt – with the famous notion “I was only doing my job and serving my party”, or – especially in Frank’s case “I tried to hide and save them, to exclude – but not kill them“. This concerned their stance to Jews, and the pretext was the first transport of Jews was from the city of Ostrava were greeted by Eichmann himself. The other characters – representing mostly Jews and other Nazis, but also “average Czech woman” – and events, including the ever-present competing with Frank, merely complete the image of war-town Europe. 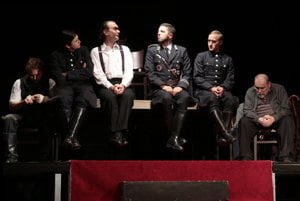 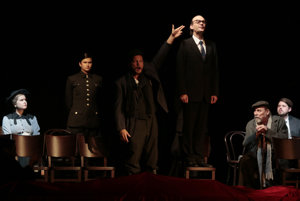 People react in various ways; but positive reviews and awards helped a lot, Marek Cisovský who plays Eichmann and who got the Theatre Review Award 2015, said – adding that the reaction in Nitra was one of the best. “People probably do not like themes like this very much” he added.

Director Ivan Krejčí and author Tomáš Vůjtek explained that the idea stemmed from certain nostalgia for communism and the effort to downplay its evils. This bore the first part, and the ambition to show also the danger of technocratic improvement at the cost of spiritual and social development, together with need to show the perils of fascist totality, resulted in “The Hearing”.

Another play – performed on September 25 – the Slovak “Back Then in Bratislava,” also returned to the times of communism. In the personal story of Žo Langerová, wife of one of the so-called traitors sentenced in connection with an infamous trial of bourgeois nationalists, the Martin theatre and writer Peter Pavlac and director Patrik Lančarič offered an overview of a big part of the 20th century in Slovakia. The main heroine played by Jana Oľhová gives up her own ambitions (including literary ones) to help her husband, Oskar Langer, fulfil his communist political ideals, returning with him home from emigration (as Jews, they fled the war to the United States), only to be again persecuted for their origin rather than their political views. 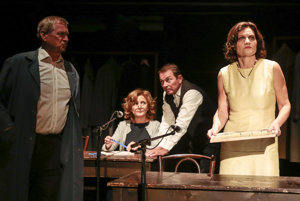 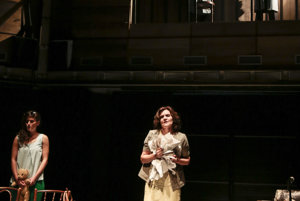 Ultimately, Oskar Langer – originally invited to return by his friend and one of top communists Karel Bacílek, was sentenced to 22 years in prison, before being offered amnesty after nine years — which he refused. He felt innocent and wanted to prove this. After his return home, to wife and two daughters, he still lived rather for the injustice and effort to rectify it than for his family – and died prematurely.

In 1968, the year of Prague Spring, Langerová emigrated again and the play partially retells her agony and dilemma when her older daughter decided to go back to Czechoslovakia. The piece is based on the autobiography of Langerová, as completed by her daughters.

Another Slovak performance, Solo Lamentoso, is less political and outlines the story of a woman who feels bullied and rejected by her neighbours and fellow inhabitants of Štúrovo, only to find revenge by playing a single aria from the loudspeakers on her roof aria every day between 6 a.m. and 10 p.m. in a loop. The piece written, directed and performed by Sláva Daubnerová, is based on a true story that filled Slovak media, but failed in attempt to look at the whole affair through the main character’s eyes. 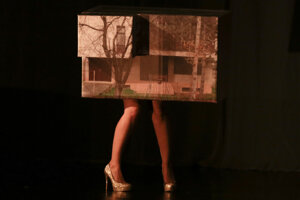 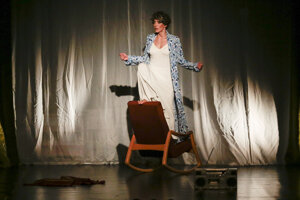 There were some more domestic as well as foreign performances on offer, as well as other accompanying events. If any conclusions can be drawn from this selection, it seems that European theatre – although still including documentary theatre – has moved on to more sophisticated styles, albeit still very engaged and society-oriented.

And where is the “Ode to Joy” as the motto of this year’s festival suggests?

Well, the joy seems to be more subtle, more ephemeral and less institutionalised than a single musical piece. But the fact that there is still art, music, dance and theatre to express feelings, ideas and to reflect the reality; and that there is a theatre festival surviving after 25 years, and still presenting thoughts, arts and their authors, is cause for joy in itself.