First cars expected to drive the ring road in 2020 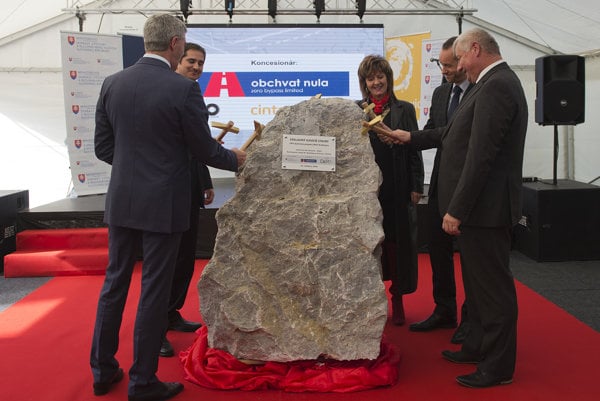 The construction of the Bratislava ring road, consisting of stretches of the D4 highway and the R7 dual carriageway, was officially launched, with Transport, Construction and Regional Development Minister Árpád Érsek (Most-Híd) ceremonially tapping the foundation stone in Šamorín (Trnava region) on October 24.

“This road will be one that, not only here but also in the surrounding area, will help people who spend almost four hours a day in cars wondering what to do next; whether to move away from here or remain,” said Érsek earlier in the day as cited by the TASR newswire.

The R7 dual carriageway along with the D4 highway will make it easier for people from villages around the capital who commute to Bratislava every day, unburdening traffic especially on the I/63 first-class road.

A consortium led by the Spanish firm Cintra, which won the tender to design, build and operate the ring road as a public private partnership project (PPP project), has already launched archaeological work on the future road, and actual construction work should begin in March 2017. 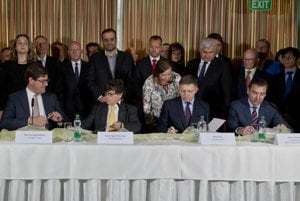 Cintra representative Jaime Lamela, also present at the press conference, stated that in the next few weeks the consortium will not only apply for the permits necessary for the construction, but will also explain the construction schedule to the villages concerned.

Based on the contract, the entire project is to be completed in October 2020 but cars are expected to be able to drive on the R7 dual carriageway as early as April 2020.

Érsek expects the deadlines to be met. Even though the workers are somewhat behind schedule at the moment, they should be able to finish the project on time, stated the transport minister.

The consortium led by Cintra signed the contract for the Bratislava ring road in May. It will build the ring road in four years and three months for annual instalments of €52.8 million over 30 years of operating the road, which will then be transferred into state ownership. After 30 years and with inflation taken into account the ring road should cost around €1.76 billion.