A bust of Alexander Dubček, the late Czechoslovak politician and a European symbol of social justice, was unveiled in Strasbourg. 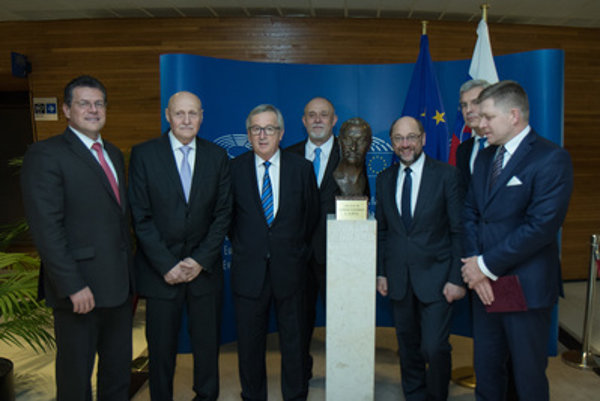 The Slovak presidency of the Council of European Union that will conclude at the end of 2016 has been highlighted, among other things, by the unveiling of the bust of famous late Czechoslovak politician Alexander Dubček, the symbol of the Prague Spring.

The ceremony took place at the European Parliament building in Strasbourg on December 13. European Parliament President Martin Schulz attended the unveiling of the bust and called Alexander Dubček an icon of his own childhood and youth. Schulz quoted former German chancellor Willy Brandt to comment on the contribution of the famous Slovak: “Once the virus of democracy is spread, it cannot be stopped. Once people get a taste of democracy, they will never forget it and will soon begin to demand it.” Schulz added that Dubček was one of the most important personalities of Europe, and it is an honour to have his bust exhibited in the EP rooms in Strasbourg. In 1988, Dubček received an honorary title from Bologna University and he is also the 1989 laureate of the Sakharov Prize for freedom of thoughts awarded by the EP.

Both sons of Dubček, Milan and Pavol, were also present during the ceremony, the SITA newswire wrote.

The Slovak politician believed in a better and more just society and his ideas of social justice and democracy have reached beyond national borders, Slovak Prime Minister Robert Fico stated during the unveiling. “Dubček believed in a better and more just society, he dedicated his whole political career to that end,” said Fico as quoted by the TASR newswire, adding that the former first secretary of the Central Committee of the Communist Party of Czechoslovakia (ÚV KSČ) served as a symbol of modern social change that erstwhile Czechoslovakia attempted to implement in 1968.

“The life of Alexander Dubček only confirms the message of his words,” the Slovak PM said. “He has become not only a figure of global importance but also a source of inspiration for people.”

The career and the fate of symbol

In January 1968, Dubček was elected the First Secretary of the ÚV KSČ, the top party post. He attempted to reform the communist regime both in the political and economic realm, an effort that was cut short by the invasion of Warsaw Pact armies into Czechoslovakia in August of the same year. The period went down in history as the Prague Spring. In June 1970, Dubček was expelled from the communist party and returned to politics only after the 1989 Velvet Revolution that toppled the communism. He died on November 7, 1992, shortly before his 71st birthday, of injuries sustained in a car crash.