Hiking trails in High Tatras could tell tales on how advantageous it was in the past to lie close to main railway lines; thanks to this fact, they thrived and got rich thanks to regular and abundant visits by moneyed clients from Budapest or Vienna. 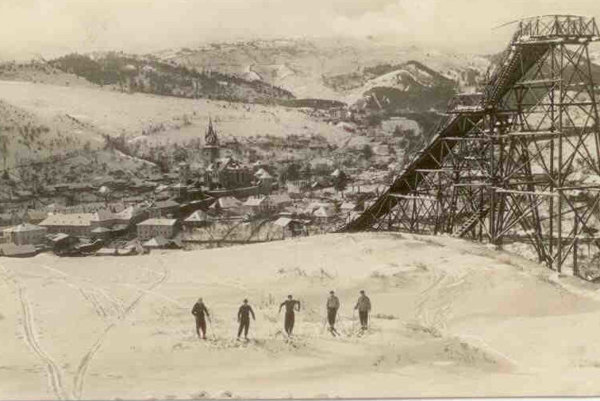 Beginings of skiing in Kremnica... (Source: Courtesy of B. Chovan)
Font size:A-|A+

However, new winds also brought new opportunities –thanks to the railway – to Kremnica, for example. The town was along the railway line Budapest – Vrútky, and the ride from Budapest took a mere 5 hours. Those who got off the train at the Kremnica station were mostly skiers. It seems that in Kremnica, everything necessary was prepared for fans of skiing. Immediately after they got off, they were able to ski directly from the station to the town centre which lay about 150 metres lower. There, experienced ski instructors were already waiting to take experienced athletes to nearby hills and teach them skiing techniques. It is worth knowing that in the 1900s, there were not too many skilled skiers on the slopes.

Near Kremnica, not only downhill and cross-country skiing were popular, but also ski jumping. The first ski jump was built here in 1914, for the Hungarian wide ski race. In jumps, Hungarian skier Kaczander won, jumping an impressive 15 metres, but this was the end of Hungarian dominance in world skiing. One of the reasons may have been that four years later, local ski resorts became part of the newborn Czechoslovakia.

Parameters of the first ski jump are not known but it has been recorded that the second one, built in 1922-23, stood 740 metres above the town and the best skiers were able to jump as far as 40 metres. The ski jump was named after Tibor Eleöd, famous benefactor of skiing in Kremnica. Close to this jump, a smaller one for youth also appeared.

It seems that Kremnica inhabitants found building ski jumps their mission, as in the 1930s they started with the idea of building the biggest ski jump in the whole country, with the most daring people hoping it could even be the record of central Europe. The construction should have born the name of army general Josef Šnejdárek who came personally to have a look at the construction.

The general, who fought nearby against Hungarian Bolsheviks, liked the jump but in an interview for the Športový týždeň (Sport Weekly) magazine, he complained about certain a communication discomfort when he expressed the wish to be able to make phone calls from Kremnica even after 18:00. Finally, as is sometimes the case with megalomaniac projects, the General Šnejdárek Ski jump remained unfinished; but otherwise, his wish concerning phone calls was fulfilled, and currently, you can routinely make a call from Kremnica even at night.

In this postcard from 1930s, we can see a frame of one of many Kremnica ski jumps at Rennwiese.