While it is possible to buy amateur pyrotechnics, people using them risk a fine in the capital. 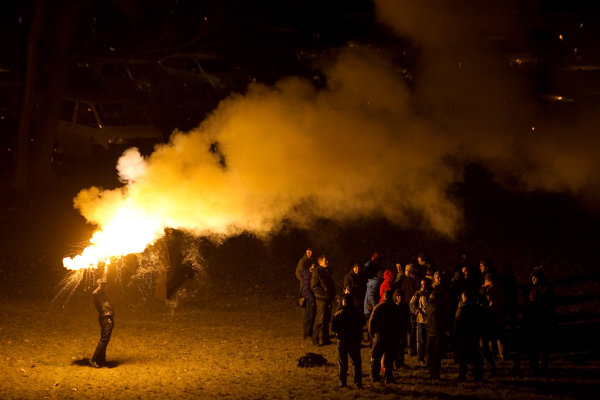 This year it could be quite expensive to celebrate the arrival of the New Year with amateur pyrotechnics in Bratislava. Aside from the money paid for maroons, petards, long sparklers, roman candles, fountains or multi-effect pyrotechnics, their users may be fined up to €33 for lighting them.

In October, Bratislava councillors adopted a ban on the usage of two out of four categories of pyrotechnics in Bratislava in order to curb noise, injuries and stress for old people and animals. The ban is effective as of November 1, while there is no exception for festivities on New Year’s Eve. Thus in Bratislava the usage of of all pyrotechnics is prohibited, except the F1 category (can be used by children up to 15 years and includes, for example, sparklers up to 40 cm, children’s fountains and squibs) and the F4 category (used for firing professional fireworks).

The Bratislava city council call on people planning to celebrate the arrival of the New Year in the downtown, not to take pyrotechnics with them and promises sufficient compensation. Apart from the traditional midnight fireworks to be fired from a ship on the Danube River, there will also be interactive digital fireworks on the Main Square.

“The city is preparing grandiose fireworks for all,” said Old Town Mayor Radoslav Števčík. “People do not need to fire their own amateur fireworks somewhere among the mass of people. Really it is necessary to consider people as well as small children.” 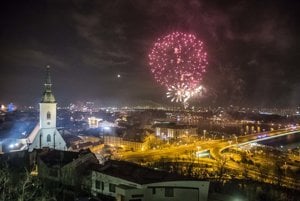 Read also:Silvester in Bratislava will be smart Read more

Those firing banned pyrotechnics can be punished with a fine of up to €33, and in some special cases, when the usage of pyrotechnics is defined as a criminal offence, the fine may climb to €500.

The municipal police have already solved three violations of the ban. The perpetrators went away with fines.

“We solved the latest case at the beginning of the week before Christmas when shortly after midnight a 23-year old man from Strážske fired pyrotechnics on Hviezdoslavovo Square,” said Peter Pleva, spokesperson of the Bratislava Municipal Police.

The city will test the effectiveness of the ban on New Year’s Eve when traditionally the pyrotechnics are used the most.

In the Old Town, there will be enforced patrols of municipal and state police as well as security guards. Firefighters and paramedics will also be deployed.

Additionally, it will be possible to enter the central celebration zone, Hviezdoslavovo Square, only via six check points. Guards will carry out checks to ensure people do not take prohibited items with them into the central zone. This includes glass bottles, knives or other sharp or dangerous items, as well as pyrotechnics.

The entry points into the central zone on Hviezdoslavovo Square will be at the crossroad of Laurinská and Rybárska streets (close to the Čumil sculpture) and on the crossroad of Mostová and Medená streets. Another one will be at Palackého Street from Kúpeľná Street. Guards will check visitors also at Jesenského Street next to the Slovak National Theatre and on Gorkého Street next to Poštová Banka. An entrance to the central zone will be located close to the US Embassy and Strakova Street.

The ban on usage of some categories of pyrotechnics does not apply to their sale and thus it is possible to buy them either in specialised shops or even supermarkets.

Producers and sellers of pyrotechnics protest against the ban in Bratislava. They see it as going beyond the valid legislation and plan to turn to the Constitutional Court in early 2017.

Bratislava is not the only city in Slovakia in which amateur pyrotechnics are banned. Also people in Košice and Banská Bystrica are prohibited from using pyrotechnics on December 31 and January 1.