Snow and cold temperatures complicate traffic, from impassable mountain passes to city accidents to a broken water pipe that gushes instantly frozen water onto a road. 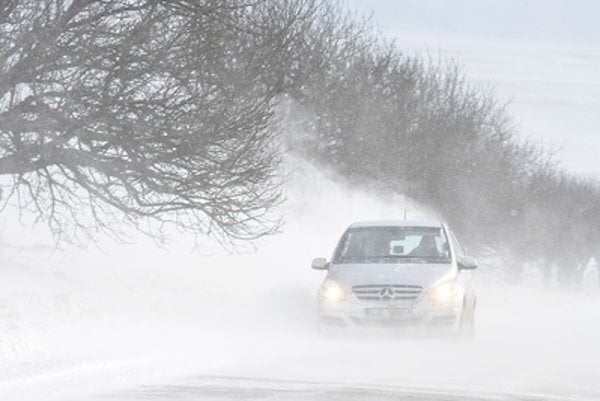 Snow and wind are affecting Slovakia, especially drivers out on the roads. (Source: TASR)
Font size:A-|A+

The heavy snowfall that started on January 11 evening has caused complications for road traffic across Slovakia, from city transport in Bratislava through impassable roads in almost all regions of Slovakia to closed roads in mountain passes.

Slovak police warn that drivers should pay attention to the most up-to-date information on the roads, as ever more sections see trucks turned upside down, cars crashed and some roads made impassable by snow-drifts.

In the eastern district of Svidník, the road between Radomá and Hradisko is closed, as is the Duklianskych hrdinov Street in Vranov nad Topľou (due to a broken water-pipe that pours water on the street, freezing immediately).

In Bratislava, a city-transport bus had an accident in Slovnaftská Street and the whole city-traffic schedule is delayed, the aktuality.sk website wrote on January 12 noon. Up to ten road accidents have been reported in the capital so far.

The road from Bojnice Castle to Kostolná Ves has been closed down; and the road from Prievidza to Handlová is impassable, as a truck is being lifted from a ditch.

Another truck is stuck near Oščadnica, in the Čadca district in northern Slovakia.

There are some success stories, though, too: the road in Strelenka, a neighbourhood of the town Lysá pod Makytou near the Czech border is passable again – although still in just one lane.

Mountain passes in central Slovakia, Donovaly, Šturec and Havran, are closed for trucks (being impassable for them) and the road in Svrčinovec in northern Slovakia is impassable in the direction of the Czech Republic.

Several roads report snow-drifts, so all drivers are recommended to drive carefully and slowly.