Bratislava’s sky-high ambitions to be capped

City council plans to limit the height of new buildings, and restrict sites via zoning. 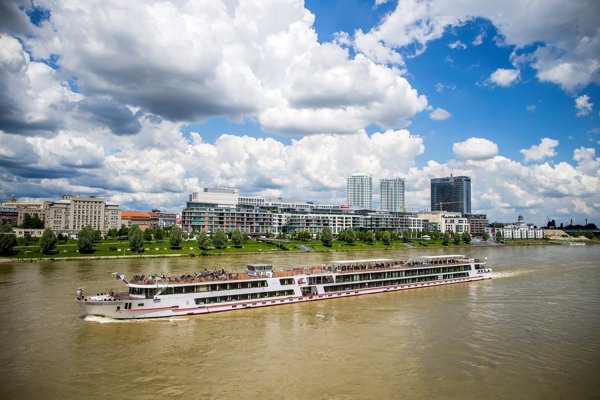 Chaotic and without concept. This is how many people describe the proliferation of high-rise buildings in Bratislava after the fall of the totalitarian regime in 1989. That era has become notorious for haphazard development and the construction of new buildings which met the interests of developers rather the needs of the city or its citizens. Now the city council wants to introduce new rules for future construction. In particular, it plans to regulate the height of new buildings via the city master plan. However, such a change typically takes several years.

“We cannot change the past, but we can at least introduce some order into what will come,” Bratislava Mayor Ivo Nesrovnal said.

Skyscrapers in the capital

When wealthy butcher Rudolf Manderla built an 11-floor, 44-metre tall building, known as Manderlák, on SNP Square in 1935, it was dubbed ‘the first Slovak skyscraper’. It retained this status until the 1970s when even taller buildings, including the Slovak Television tower, Hotel Kyjev, Presscentrum and others, were built. More followed after 1989.

Bratislava City Council considers the construction and location of high-rise buildings in Bratislava to date as having been chaotic. As a consequence of a lack of regulation, there are some badly located towers, like Aupark Tower, sited just next to the only pillar of the SNP Bridge, or the Manhattan apartment block in Bratislava’s Nové Mesto borough. The council would like to prevent such developments in the future.

“My experience is that when a high-rise is located insensitively in a regulated area, this may be perceived as a deed of social aggression towards the existing community,” said Nesrovnal.

What the council proposes

Nowadays, nobody regards Manderlák as an extremely high building. This raises questions about what height is now acceptable for high-rise buildings in Bratislava, and where they should be located. The city council has been pondering this question for years.

Nesrovnal would like to see high rises concentrated in one part of the city, outside the city centre.

“But this is not possible in Bratislava because the previous development was very chaotic,” said Nesrovnal.

The city council has prepared an urban zoning study. The study offers three variants of zoning. Within these it proposes various height levels for future buildings in individual parts of Bratislava, as well as setting maximum heights for buildings. These should not exceed 111 metres, which is the height of the current highest building in the city – the National Bank of Slovakia tower.

Buildings higher than 60 metres should be built, based on the ‘zero’ variant, in the Chalupkova (near the current bus station), Pribinova (near Eurovea) and so-called Celomestské Centrum Petržalka (New Lido – opposite Eurovea on the other bank of Danube) zones. The first variant adds to these the Klingerka (close to the Winter Port) and Artmedia (next to the Sad Janka Kráľa park on the Petržalka side of the Danube) zones. By contrast, the second variant includes only the Chalupkova and New Lido zones. In essence, the study basically proposes to confine new high-rise development to the ‘new’ centre of the city and to the opposite side of the Danube River.

“I consider height zoning to be one of important guidelines in the creation of the city,” Nesrovnal said as he introduced the study to the general public in October. He perceives urbanism as the creation of a community and society.

There are several developers in Bratislava that plan to build high rises in Bratislava, several above the proposed cap of 111 metres. For now, they have been careful in their comments about the proposed zoning plan, pointing out that it is not a binding document and saying that it would therefore be premature to assess it.

“It is a basic document, which is not final and which will change further,” said Daniela Stričková, spokeswoman for J&T Real Estate. “Of course, we are monitoring these processes.”

For the time being, there are plans to extend the existing Eurovea development towards the Apollo Bridge. Part of this extension should also be high-rise.

Plans by developer HB Reavis as part of its project for the new central bus station, Stanica Nivy, include an office building that would top out at 115 metres.

Developers also plan to build high rises in the Matador zone. And HB Reavis and J&T are planning other towers on the Petržalka side of the Danube, in the New Lido area.

How it looks today

Currently, the height of buildings is regulated by the so-called index floor space area, according to the area of their footprint. This means that the smaller a plot is built on, the higher the building can be. For now, there is no formal cap in the capital on building heights. Builders, in order for their projects to materialise, need a so-called binding position, i.e. agreement with the construction, from the city. Afterwards, they must ask the construction office in the relevant borough for a construction permit, Ivana Skokanová, spokesperson for Bratislava City Council explained.

Citizens of Bratislava and others involved now have until the end of January to send theirs comments on, and objections to, the proposed zoning plan to the city council. Afterwards, the council will assess these and elaborate a final variant of the new height limits for buildings in Bratislava. Then it will again submit the document to experts, city boroughs and citizens for discussion. After its completion it will submit the document to councillors for approval. And after its passage and incorporation into the existing master plan, the height regulation will become effective.

“During the current phase it is not possible to estimate precisely how long this process will take,” said Skokanová. “But based on our experience, it may last quite a long time, possibly years.”