Waste sorting and recycling are still challenges in Slovakia. 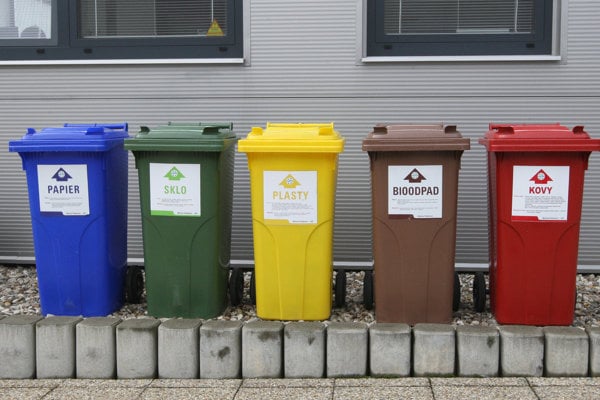 Slovaks generate almost 1.9 million tonnes of municipal waste annually. Of this amount, almost 70 percent ends up in landfills and only about 30 percent is recycled or used for energy recovery. Slovakia plans to decrease the amount of waste going to landfills, via separation of biodegradable waste. Thus, as of the beginning of 2017, municipalities are obliged to enable their residents separate disposal of their biowaste, like kitchen and garden waste.

Two cities, Bratislava and Košice, successfully lobbied for less strict obligations as both have incineration plants, where they incinerate mixed municipal waste and generate heat and electricity from it. They are therefore only obliged to secure the sorting of garden biowaste for family houses.

Branislav Moňok from the civic association, Priatelia Zeme (Friends of the Earth) perceives each exemption from any duty as bad. This is also the case of kitchen biowaste.

“Biowaste makes up the biggest portion of the municipal waste also in Bratislava,” Moňok told The Slovak Spectator. “Its collection and recycling might be cheaper than incineration. This would save the money of citizens.”

Houses in Bratislava to request compost or collection bin

Now, the Bratislava city council is calling on all households living in family houses to join the collection of garden biowaste. They will do so by filling in an application available at its website and send it to the department of local taxes and fees at Blagoevova 9, (P. O. BOX 76, 850 05 Bratislava 55) until January 31. In the application, they can decide whether they want the city to give them a compost bin or a brown collection bin. If they opt for the compost bin they can use the resulting compost for their own purposes.

Those households which already have a compost bin will indicate this in the application and in turn the city will not give them any bin. Households can also agree with neighbours to have a collective compost or collection bin.

“The regulation [on garden biowaste] applies to more than 20,000 households, that generate annually more than 5,000 tonnes of biodegradable waste,” said Bratislava spokesperson Ivana Skokanová. “Of this waste, a large part ends in bins for collection of mixed municipal waste, which is not a proper way for handling such waste.”

It is estimated that biowaste makes up about 40 percent of all municipal waste.

The city council, after receiving applications from households, will deliver the requested bins to individual households by the end of February.

It will be the city waste collection company, OLO that will collect the garden biowaste. It will not incinerate it as it does all other mixed municipal waste, but it will transport the waste to its compost plants for further processing, said Beata Humeníková, spokesperson of OLO.

Bratislavans will be able to throw into collection bins flowers, wood chips, sawdust, cut grass, branches, fallen leaves, rinds of fruits and vegetables, rotten fruits and vegetables as well as weeds. Yet they should continue to dispose of kitchen waste of animal origin, like milk or meat products in the black bin for mixed municipal waste.

Glass, paper, plastics and other waste

Citizens of Bratislava Region generate the most waste per capita in Slovakia, the total was 460 kilos per capita last year based on data of the Environment Ministry, which is proportional to the economic strength of the region. Compared to it, citizens of Prešov Region, generate only 264 kilos of municipal waste per capita. On average, Slovaks generated 348 kilos of municipal waste in 2015, still below the average in the European Union. In 2014 it was 475 kilos per capita. But while the average figures in the EU are decreasing, in Slovakia, they are increasing, based on available statistics of the Environment Ministry and Eurostat.

The municipal company, OLO annually collects about 160,000 tonnes of municipal waste in Bratislava. Of this amount, mixed waste makes up about 115,000 tonnes. OLO incinerates this waste in its incineration plant in Vlčie Hrdlo on the outskirts of Bratislava. The plant is used for generation of heat and electricity. OLO annually generates electricity to cover consumption of about 22,000 households.

Bratislavans annually separate almost 7,000 tonnes of waste and cardboard, 4,400 tonnes of plastics and 5,600 tonnes of glass. But sorted waste still makes up only less than 70 percent of the total municipal waste. Thus Bratislava, as well as other cities and villages, have a lot of room for improvement. However, as Humeníková of OLO noted, the amount of separated waste has been increasing every year and people sort out mostly glass. Additionally, people also often throw waste into bins for paper and cardboard or plastics that does not belong.

“Most of the waste from Slovak households ends in mixed municipal waste, while as much as 90 percent of it can be sorted out,” Janka Ružická from the civic association EKOrast told The Slovak Spectator.

She believes that financial motivation would encourage people to separate more waste, i.e. that those who properly sort their waste should pay less for disposal of their waste.

Also Moňok of Friends of the Earth agrees that people should feel the effect on their wallets when they sort more waste. The experience of the association is that people want to sort out their waste, but it is necessary to create conditions for them.

“Practice has shown us that we cannot wait for people to look at their housing estates for bins for sorted out waste – they need to have them right under their noses. Afterwards, they will sort the waste,” Moňok told The Slovak Spectator.

Ružická also sees a lack of collection yards where people can bring large, construction or other special waste in Bratislava. The total number of such places is below 10.

Skokanová, spokesperson of the Bratislava City Council, explained the low number of collection yards due to a lack of suitable plots for their construction.

There are several sources where to obtain information about sorting waste in Bratislava. The Bratislava city council as well as OLO informs about waste sorting on their websites. OLO also opened last year an educational centre at its incineration plant at Vlčie Hrdlo and organises open houses in the plant as well as educational activities for schools. Also Natur-Pack, a service company for producers in the system of collection, recovery and recycling of packaging waste is active in educational activities when it cooperates, for example, with the Daphne and Živica organisations.

Natur-Pack was also one of the partners of EKOrast in developing a free mobile application, Green Bin. It advises those interested on how to sort waste, where the nearest collection yard is located or where is the closest shop collecting old electrical appliances or old medication.

“Slovaks often complain that they do not know what kind of waste to sort and into which sorting bin they should throw individual pieces of waste,” said Ružická. “This has inspired us to collect all this information and prepare a simple aid in the form of a mobile app.”