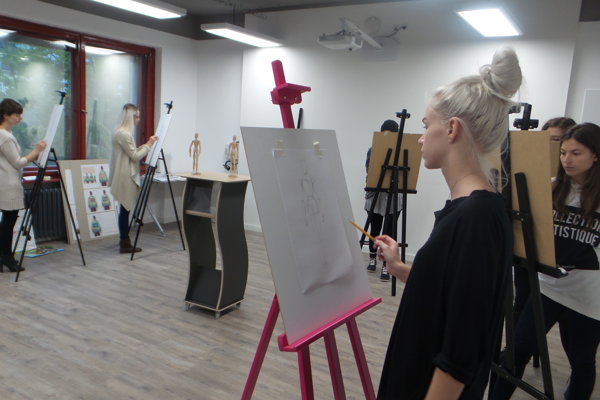 Slovakia has many talented fashion designers, but they often fail in promoting their products abroad. They are known mostly as producers, but not as creators of something new, say the representatives of the new fashion school which opened their doors to its first students in September 2016.

MOD’SPE Paris Central Europe is the only subsidiary of its French mother in this region. It now educates 13 people in the fashion product manager specialisation, with the aim to fill the existing gap on the Slovak fashion market.

“It is the only school in central Europe which is closely connected with fashion business,” 19-year-old Petra Špaková from Harichovce told The Slovak Spectator when explaining the reasons for studying at the university.

She is one of the first students who started attending the school in September 2016.

Diplomas are the same

The subjects and lectors are exactly the same as in Paris, with the only exception – they are taught in English. Also the diplomas they receive after graduation have the same value.

Bratislava competed for the school with other capitals in the region. There were several factors that decided in its favour, including the proximity to France, the economic and safety situation, and the development on the fashion market, she explained.

The school opened its doors after some 3.5 years of preparations. It currently teaches subjects within a three-year bachelor degree. The students come mostly from Slovakia and the Czech Republic, but there is also one from Cyprus. They gradually plan to accept students from other countries, for example they have already accepted a student from Nigeria and one from Libya.

The number of students is expected to gradually increase from current 13 as the plan is to have about 50 students comprising the entire study programme, Paveková said.

The school is open to everybody. Students are either secondary school graduates or people who already graduated from one university. This is supported by the age range. While the youngest student is 19 years old, the oldest is 36, according to Paveková.

The school is based on a dual education principle. The students receive theoretical knowledge in fashion culture, products and collections, as well as the basics of marketing, commerce and communication. At the end of every school year they need to participate in an internship directly in fashion companies.

“Without it they cannot start the new school year,” Paveková said.

Since MOD’SPE Paris was founded by the Fédération Française du Prêt- à-Porter Féminin, the students can undergo practical training at one of the firms it associates with. In the end, they need to prove that they worked on a specific project for the firm and write a report about it, Paveková explained.

The possibility to do an internship directly in companies and obtain new contacts is among the highlights mentioned by another student of the school, 28-year-old Hana Hanzelová from Znojmo in the Czech Republic.

“The school is a connection between you and the employers,” she told The Slovak Spectator.

The school can, among other things, boast with the high number of graduates who find work in their field of study within three months, according to the French statistics. This is also an added value for its graduates, including those who will complete the studies in Slovakia, said Paveková.

One of the school’s aims is also to establish cooperation with Slovak companies, particularly those with French owners. Currently they are holding talks with some firms established in Bratislava, Paveková said, adding they want to gradually extend the collaboration. They have also addressed some Slovak fashion designers who welcome this possibility, she added.

Though there are quality brands in Slovakia, not many of them are international and have exported to other countries. This, however, is expected to change soon, according to Paveková.

“We have here fashion students and young designers, but we lack people able to create the business,” she added.

This is what they try to teach their students. The lectors at the school have several years of experience and try to solve the problems with the students from their own practice and experience.

“It is more practical as you work on projects, do research,” 22-year-old Mária Sole Urbanová from Bratislava told The Slovak Spectator, comparing the studies with Slovak universities which are more about theoretical knowledge.