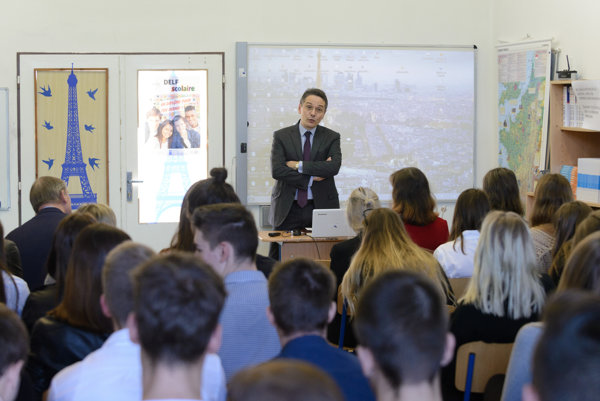 The United School on Slančíkova Street in Nitra was granted the LabelFrancÉducation certificate, which proves the quality of the French language taught at the school.

The certificate represents very high recognition awarded by the French foreign minister. Only 158 schools in the world have it.

“I hope it will motivate students to achieve better results in their studies,” said the school’s headmaster Jaroslav Maček, as quoted by the TASR newswire.

The best students of the school also received the diplomas for their results from French Ambassador to Slovakia Christophe Leonzi. All 59 of them learn and test in French which are then corrected in France, TASR wrote.

The school in Nitra joined four other bilingual grammar schools that received the quality certificate in Slovakia. It is also the only Slovak school that was granted the certificate, though it only has one section with extended teaching of the French language.

Leonzi praised the big number of young students from the school that received very good results on the DELF exams. They do not study only the language, but they also have geography, history and civil education in French. The school also promotes French culture, TASR reported.