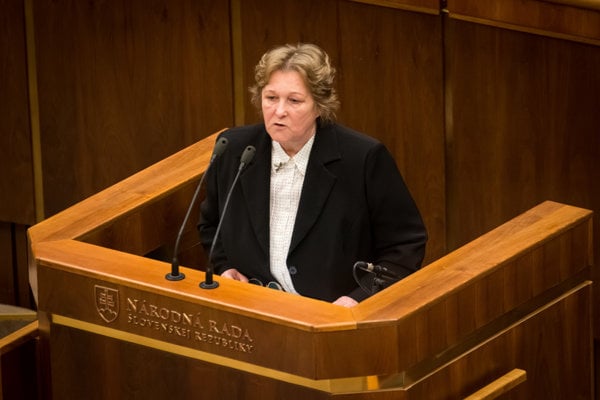 Back in September 2016, a blog post by opposition MP Natália Blahová highlighting alleged suspicious practices – including under-age sex between staff and vulnerable young people – at the Čistý Deň resocialisation centre in Galanta, in Trnava Region, provoked a public outcry. The case resulted in several inspections by MPs and even a criminal investigation, but no one has yet been disciplined or charged.

Now the ombudswoman, Jana Dubovcová, has pointed to flaws in the management of the facility in Galanta, and other similar centres, questioning the whole decision-making process and its impacts on children. One of her most serious conclusions is that in some cases children and youths are being sent to the facilities without experts saying it is necessary.

“The revelations of activities by the socio-legal protection authorities in surveyed areas indicate that their methods often result in violations of the fundamental rights and freedoms of children,” Dubovcová writes in her report.

The Labour Ministry, in response, dismissed her report as “purposeful and clearly political”.

“It summarises in a biased way the media reports from various sources released in the past six months, particularly the opinions of some opposition politicians that have been politicising the topic since the very beginning,” Veronika Husárová, of the ministry’s press department, told The Slovak Spectator.

The ombudswoman is independent of the government and some of her previous reports have aroused angry criticism from ministers.

The Čistý Deň case hit the headlines in early September last year, when Blahová, an MP for Freedom and Solidarity (SaS), wrote a blog post highlighting alleged sexual abuse of Natália, a minor in state care. She wrote that a therapist at the centre had had sex with the girl against her will in October 2014. Under Slovak law, sex involving children under 15 is illegal, even if it is consensual.

Peter Tománek, the director of the Čistý Deň centre, denied claims that children had been mistreated at his centre, and received backing from several parents whose children are currently resident at the facility.

Meanwhile, the Office of the General Prosecutor launched a criminal investigation into the claims of sexual abuse and abuse of a person in care at the centre.

More widely, there was discussion about whether Čistý Deň should keep its accreditation. While an accreditation committee proposed to the Labour Ministry in mid-September that accreditation should be withdrawn, Labour Minister Ján Richter decided to postpone his final decision, saying he wanted to wait until the end of all investigations that were currently underway, the private broadcaster TV Markíza reported in late December.

Many young patients with a history of drug abuse go to resocialisation centres voluntarily, based on the advice of experts. They want to stay clean after treatment and find their place in society, explains Ľubomír Okruhlica, the head of the Centre for Therapy for Drug Dependencies.

There are, however, also facilities to which clients go following a court order based on a recommendation from a social worker. This poses problems, as neither the labour office nor the resocialisation centre is a medical facility at which patients can be treated or diagnosed, according to Dubovcová’s report.

The report reveals that some children placed at Čistý Deň had not been properly diagnosed and had not even undergone treatment.

Based on her inspection of Čistý Deň, Dubovcová found out that in some cases the main reason for placing a child at the facility was merely a suspicion that the child could take drugs. After parents had met with a social worker, the respective labour office had proposed to a court that the child be placed at the resocialisation centre.

Though some of the affected children were diagnosed after being placed at the centre, in the case of Čistý Deň this was done by facility employees. This was not right, according to Dubovcová, as employees may just have been following the instructions of their employers.

Okruhlica, of the Centre for Therapy for Drug Dependencies, confirms the importance of proper diagnosis, saying that a psychiatric examination often reveals the real reasons behind drug-taking by children and young people.

Instances where patients do not go to a resocialisation centre voluntarily, but are sent there by the courts, create two significant potential problems, according to the expert.

“First, the client can be somebody who does not need any resocialisation at all as he/she is not drug-addicted and the problems are only symptomatic,” Okruhlica told The Slovak Spectator, explaining this may include problems with parents or at school. “Second, if a client suffers from serious mental diseases, resocialisation centres often lack the capacities to handle them.”

Social advisor and former head of the labour office in Bratislava Ida Želinská also recalls several cases in which decisions were passed in a rather vague way. All that was needed was “a proposal by the administrative authority – the labour office”, without hearing from the children.

“All [the cases I have reported] have one thing in common – disrespect for the child’s fate and nearly zero communication by experts with children and their parents, or with one another,” Želinská told The Slovak Spectator.

She also points to a lack of external supervision, saying that the only specific person in the proceeding is the judge who signs the final decision. Moreover, there are no clear rules, and parents and their children often do not know why they need to be placed into resocialisation centres, Želinská added.

The Labour Ministry stated that the ombudswoman’s report does not take into consideration the independent court decisions and the testimonies of satisfied clients of Čistý Deň and their parents. Instead of being unbiased, it reflects the rhetoric of some opposition MPs who do not know the situation properly and ignore several facts, Husárová said.

The ministry also expressed concern that Dubovcová did not wait for the results of other investigations before publishing her report. It promises to re-open the talks on accreditation as soon as the investigations are complete.

“Scrapping the accreditation only based on feelings and emotions, without relevant evidence, would be easy to challenge in the courts and could eventually become unjustified,” Husárová added.

She also stressed that the ministry is intensively monitoring the situation and that the clients are “in no danger”.

The practice of courts deciding whether to place children in resocialisation centres is supported by the facilities themselves. They receive payments from the Central Office of Labour, Social Affairs and Family amounting to €12,200 a year per child, according to the report.

Dubovcová says it is necessary to secure the same conditions in all cases, whether patients decide to go to a centre voluntarily or are sent there by the courts. This should include medical examinations of children and young people.

The ministry says that Richter has already promised to adopt measures to change the operation of resocialisation facilities. He has discussed the matter with the health minister and agreed to work together to prepare changes that should “make the resocialisation processes more effective”, according to Husárová.

Okruhlica recommends amending the law so that young people are not put into resocialisation facilities without a proper diagnosis.

It is also necessary to make facilities that are run by non-governmental organisations more transparent, as currently they provide less information than ones operated by the state, self-governing regions or municipalities, and observe the minimum standards set by the EU.

“These are very simple conditions, like having qualified staff and not laymen who work as therapists,” Okruhlica added.