Market at Žilinská saved, at least for next four years

The Old Town would like to obtain the plot on which the market stands. 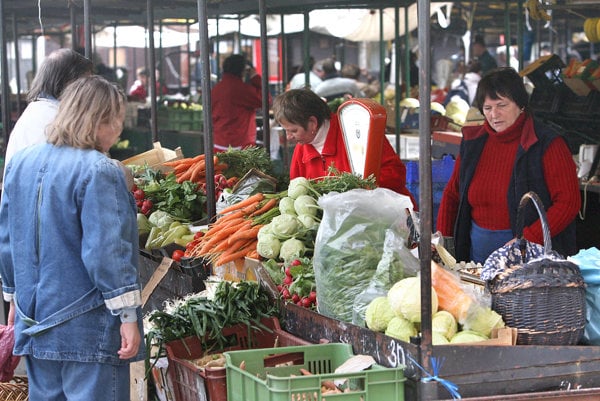 The relatively early beginning of warm weather could accelerate a seasonal drop in the prices of some fruit and vegetables. (Source: Sme)
Font size:A-|A+

The popular market at Žilinská street in the Old Town will remain in place for the next four years at least. The Old Town borough has agreed with the owner of the plot on which the market stands on its rental for the next four years, with an option to extend it for a following four years. The owner, Park-Dom Žilinská, originally wanted to build a block of apartments and a parking lot but for now, it has frozen its plans.

The market at Žilinská is the last authentic market place in the Old Town. It has been there for about 50 years. The Old Town wants to maintain it and considers rental of the plot to be only a temporary solution.

“The market’s plot must be in the hands of the borough or the city council,” said Old Town Mayor Radovan Števčík. “Only in this way will we ensure that the market will remain here.”

The city can obtain the land in two ways – either purchase it or exchange it for another plot. Števčík sees the second possibility as more likely. He is already planning to meet with Bratislava Mayor Ivo Nesrovnal to discuss the matter.

Števčík needs the approval of the Old Town’s councillors either for exchange of the plots or its purchase.

“I will do my utmost to salvage the market,” said Števčík. “Buildings can be built anywhere but it is not possible to create a market place with the same atmosphere on a fresh site.”

The existence of the market at Žilinská has been threatened by future construction for 20 years. In 2011, when plans became realistic, civic activists launched a petition for its preservation.