Every person must be protected 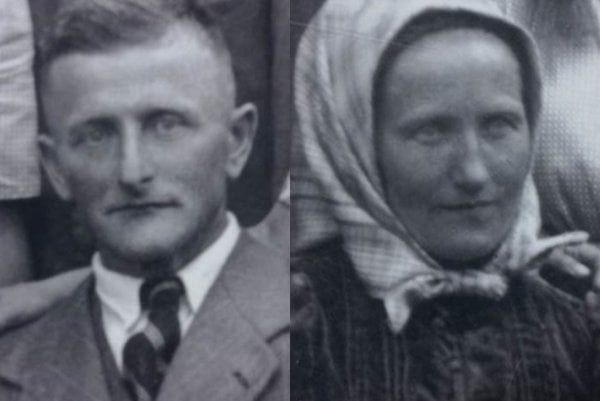 Ondrej Hažer and Immanuel Jozef Schönfeld had been friends for many years - even before the war started. On May 4, 1942, there was a possibility of deportation for Schönfelds, who lived in Prešov. Hažer, while risking his and his family’s life - decided to offer them shelter in his house in the village of Buclovany.

It was an ordinary day when Johanna Schönfeldová came to the house of the Hažer family. It was necessary to grind the grain, so Hažer took his daughters to Prešov, where Ignác Weisberg and Immanuel Jozeph Schönfeld grinded the grain. The mother, Helena Hažerová prepared a package that was to be given to Johanna Schönfeldová. The daughters handed over the package and around 17:00 when they were ready to return home, they saw a lady wearing their mum’s traditional costume. It was Johanna Schönfeldová and she went home with them disguised as their mother.

Around 23:00 they arrived in Buclovany and their mother welcomed the lady. Three days later, her husband, Immanuel Jozef Schönfeld joined them as well. Ignác Weisberg with his wife and kids were hidden in Nižná Boca village where Hažer found a hideout for them.

“Through a small window in the kitchen they received food and water and only during the night they could go out and walk around the garden,” reads a press release from the Embassy of the State of Israel in Slovakia.

Unfortunately, the Hažer family did not stay off the radar of the German army for long. Two soldiers lived in their house while resting from the battles on the front. One day, when Helena Hažerová was making dough in the kitchen, one of the soldiers almost opened the door to the pantry, where the scared Schönfelds were sitting.

“It was that moment, when they all almost stopped breathing,” reads the press release.

The Schönfelds stayed with the Hažers for 27 months, till August 9th, 1944. In August 1944, a fire was set to the warehouse of the German army, which was in close vicinity to the Hažers' house, and so the number of the soldiers in the area doubled. The risk was too high, so the Schönfelds decided to go to Nižná Boca, where Hažer helped Ignác Weisberg - the owner of the mill and brother of Johanna Schönfeld - to find shelter.

With false identity cards arranged by Hažer, they took a train and arrived at the place of Weisberg. Johanna Schönfeld’s brother, together with his wife and children, were already waiting for them.

After all, both Schönfelds survived the war, but after some time Immanuel Jozeph cotracted meningitis and died in January 1946. Johanna, his wife, emigrated together with her brother Ignác Weisberg to the US.

When the house of the Hažer family was being dismantled, there were two dates found engraved on one of the pillars: 05/04/1942 and August 1944.

“Both dates are a reminder of the time when the Hažer family rescued the Schönfelds and endangered their own lives in order to save others,” reads press release.

The Hažer family hid several Jews during the war. In addition to the Schönfelds, they helped to rescue the Grosswirth family who came to the Hažers after the Schönfelds had left.

The Grosswirth family started living with the Hažers in September 1944. Because they were both doctors, they possessed special certificates that exempted them from deportation.

“One night they received a phone call warning them to leave the house immediately or they will be deported to a concentration camp,” reads press release.

They escaped from Bardejov to the nearest village, Buclovany. First, they tried to find shelter with a christian family, whom they helped with their sick child. But the family was too scared and refused to help them, even though their child survived only because of the doctor’s help. The Grosswirths had no other choice but to try to hide somewhere else, so they asked next door where the Hažer family lived.

Initially, Hažer deliberated. If, by any chance, the Germans discovered the Grosswirths at his house, many lives would be in jeopardy. Nevertheless, he agreed to take them in. He built them a shelter inside the barn behind the house. The Grosswirths stayed there together with their two daughters – Ilma and Vierka. Hažer’s daughters remember this time as a good one, an abundant one, because of the Germans in the village.

Over time, however, the daughters and Mr. Hažer’s wife noticed that food and warm blankets were somehow disappearing.

“Only then Hažer shared the secret with his family, that he is hiding the Grosswirths in the barn,” reads the press release.

When the cold months came, the Grosswirths had to hide in the pantry, where the Schönfelds had stayed before. All of them could not live there, so the Grosswirths decided to see their friends who lived close to the polish border.

At that time, there was a generous reward promised for the Grosswirths and harsh restrictions regarding the transport were in place. Nevertheless, Hažer decided to ask for a permit from the German officer to leave the village for a day and even though the officer knew who Hažer was smuggling, he let him go. Hažer had a good relationship with the German soldiers and his daughter thought it was because of that that they let them through.

“The moment Hažer left the village his family thought they would never see him again,” reads the press release, adding that the Grosswirths were well known because they were doctors and if someone noticed them they would most certainly have reported them.

Hažer brought the Grosswirths to their friend's house and they immediately reported them. They were deported to concentration camps the next day. Despite their difficult fate and fighting typhus, all the Grosswirths survived. After the war they walked all the way to see the Hažers.

The daughters of Hažer state that saving the Schönfeld and Grosswirth families was an act of their father’s deep faith.

“They said their father was a religious man and he simply did all this because he believed that every person that God creates is precious and must be protected,” reads the press release.