Although Slovakia is not the ultimate destination country for refugees, it serves as transit country for them. 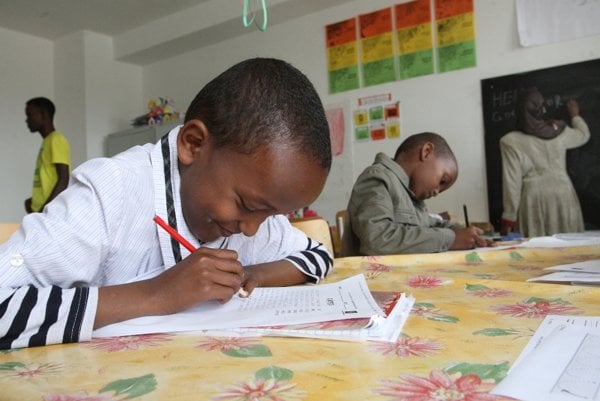 In the asylum facility in Humenné in eastern Slovakia. (Source: Sme)
Font size:A-|A+

Over 1,000 refugees have been resettled via the Emergency Transit Centre in Humenné in eastern Slovakia since 2009, the Slovak branch of the International Organisation for Migration (IOM) announced on January 20. It also informed that refugees it assists are heading via Slovakia mainly to the United States, Canada and Norway.

On January 17, a group of 23 refugees left Slovakia, landing in the US the next day, head of the IOM’s Slovak branch Zuzana Vatráľová told the TASR newswire. The number of refugees who have been resettled via Slovakia in countries that have provided them with permanent residence has therefore increased to 1,019. Of these numbers, as many as 96 percent (978 refugees) have been resettled in the United States.

Slovakia provided temporary shelter to 1,043 refugees in Humenné between 2009 and January 2017. The IOM transported them from refugee camps in Africa, Asia and the Middle East. UNHCR also participated in their resettlement and included the refugees in a programme called The Humanitarian Transfer of Refugees via Slovakia.

The IOM noted that more than half of the refugees transported to the Humenné centre have been Somalis. Refugees arriving there also come from Afghanistan, Ethiopia, Eritrea, Iraq, Palestine and Sudan. A majority of them are families with small children or single mothers - i.e. people who can neither return to their home country, nor continue to live in the country of initial asylum and need immediate protection, the IMO stated.

The capacity of the Humenné centre is 250 people, and it serves as a temporary shelter for the most vulnerable groups of refugees under the UNHCR’s protection. They can stay there for a maximum of six months, to prepare for resettlement in safe conditions. Preparation comprises a medical examination, a series of vaccinations and training in cultural orientation that prepares refugees for life in a new country.

Small children attend a nursery school, while the older ones go to a school in Humenné where they mainly learn mathematics, geography and English, said Vatráľová. For adults, the centre organises literacy, computer and English courses.