The new technique reduces the risks of paralyses after the procedure. 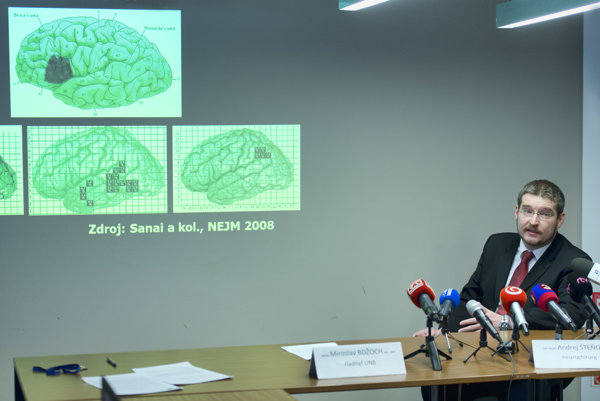 Slovak neurosurgeons managed to develop new, more secure method of operating on deep-seated tumours in the brain. They have already used it on 10 patients in the University Hospital Bratislava (UNB), the TASR newswire reported.

In most cases when surgery is done in the part of the brain called the insula, small important vessels that often run directly through the tumour may be damaged.

“A vast majority of these vessels are smaller than one millimetre,” said Andrej Šteňo of the neurosurgery ward of the Comenius University’s Faculty of Medicine and UNB, as quoted by TASR.

The vessels are hard to spot with a microscope and are very hard to differentiate from the healthy brain, Šteňo said, adding that Slovak neurosurgeons have now discovered how to display them.

“We strove for the most quality display of tumour tissue and the most precise display of main brain arteries possible by 3D sonograph,” Šteňo explained, as quoted by TASR. “During one surgery we noticed that we managed to show the small brain vessels with a diameter smaller than one millimetre, which was considered an unsolved problem in the world.”

Other surgeries that followed only confirmed it was not an accident, but the discovery of a new method.

As a result, it will now be more secure to operate on the brain.

“The identification of these small vessels contributes to preventing their damage during brain tumour surgery and significantly reduces the risk of paralyses,” Šteňo said, as quoted by TASR.

Slovak neurosurgeons have already promoted the method in the most prestigious neurosurgery magazine in the world, Journal of Neurosurgery, so it can now be used to help even more people.