A shocking defeat from Hungarians came in a crucial tennis tournament. 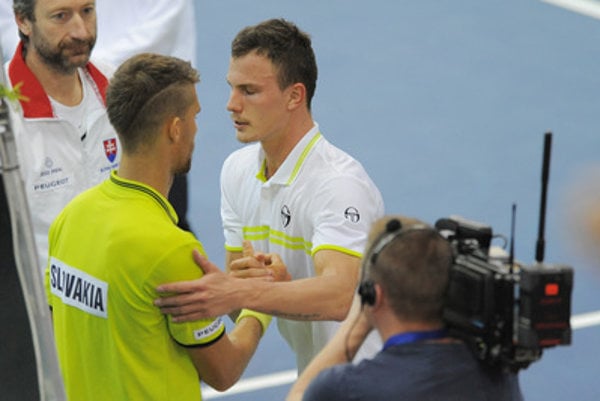 Despite being perceived as the clear favourites, Slovak tennis players suffered a crushing loss from the hands of their Hungarian rivals in the first league of the Davis Cup on February 3-5, the Sme daily wrote.

When Hungarian tennis player Márton Fucsovics claimed at a press conference that his team would win, most people perceived it as unjustified boasting. On the first day of the tournament, on Friday, Slovak Martin Kližan won over Attila Balázs but on the same day, his Slovak countryman Jozef Kovalík was beaten by Márton Fucsovics.

The next day, Fucsovics and Balázs defeated Kližan and Andrej Martin in doubles. On Sunday, February 5, Márton Fucsovics beat Kližan and the last doubles match was scratched, as the Hungarian team was already winning 3:1 in matches.

“We were better according to the forecasts but the Hungarian tennis players were better on the court,” Kližan said, as cited by Sme. “They deserve to proceed to the next round.”

He added that his match against the best Hungarian player, Fucsovics, was equal in the beginning but the Hungarian had better serves; Kližan started to have better serves only in the final set. He also admitted to poor performance in the doubles.

Kližan is used to playing on other surfaces but he said, “I do not want to make any excuses. Hungarians won. We were better according to the ratings; but if we do not use such a chance, we do not deserve to play for participation in a world-class group,” Kližan summed up.

All Slovak players are better in world charts than their Hungarian counterparts, Sme wrote. Not even Fucsovics has made it among the best 100 tennis players – being aged 24 – but he hopes this will change after the Davis Cup weekend.