The first edition of the Slovak-English map of industrial monuments in Bratislava was sold out within two weeks. 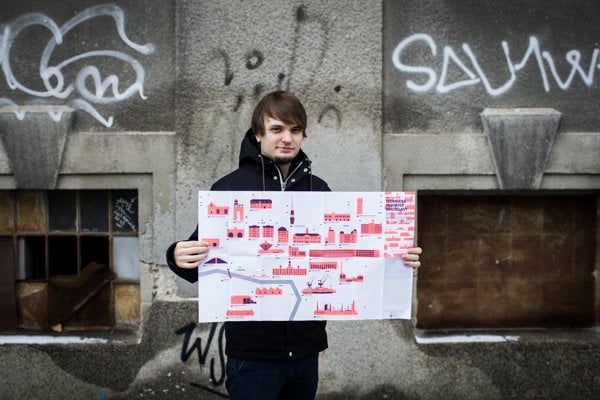 Enthusiasts from the civic association Čierne Diery (Black Holes) are fascinated by old, forgotten ramshackle industrial buildings and premises. Although their heydays are history, the group sees in such buildings remnants of their past glory and can imagine new purposes for which they can serve. To mediate this kind of experience they prepared a Slovak-English map of technical monuments in Bratislava. The Slovak Spectator spoke with Martin Lipták of Čierne Diery about the creation of the map and why forgotten industrial buildings are so interesting for him.

The Slovak Spectator (TSS): What fascinates you about technical monuments?

Martin Lipták (ML): Once these buildings were the pride of science, progress and human knowledge. Although some in their time were big polluters of the environment and some others are not particularly valuable in terms of architecture, many of them were really the peak of what man was able to achieve at that time. Moreover, they are part of the collective memory. This aspect is often forgotten. Technical monuments also fascinate us because we feel that many of Slovakia’s monuments in the more traditional sense of the word have already been discovered. Technical monuments are just waiting in the wings.

TSS: Why did you decide to publish the map, Technical monuments in Bratislava?

ML: We have been mapping technical monuments and other forgotten places in Slovakia for a quite long time, actually since around March 2015. Previously, we spontaneously travelled around Slovakia, but then we got the idea to create it systematically and also promote these monuments. The idea to create a physical map arrived in a similar way since we already had an online version.

ML: No. From the beginning we also wanted it to be a nice piece of design one can hang on the wall. Therefore, we tried to link to the visuality of graphics, on which we have been cooperating with the design studio, KAT. These are printed on the risographic printer, Risomat. It is actually a dead end in the printing technology of the 80s from Japan. When printing with this technology the results are various imperfections that you cannot predict. It’s a very spontaneous process used by designers and creatives around the world. At the same time it produces very clear, crisp colours and the whole printing process is very environmentally friendly as it uses soy-based inks. This type of printing has become a kind of hallmark for us.

TSS: What sights are on the map?

ML: Our idea was to put places on the map people can go to see, at least from a distance, and that are interesting. Not all are protected monuments, which we also point out on the map in order that people realise which monuments are still unprotected and with which monuments something could be done. We decided to put older buildings on the map, but we failed to set the exact date to stop. So we started with Hungarian factories and ended somewhere at the beginning of the former communist regime.

TSS: Which technical monuments from the map would you particularly highlight?

ML: For example, Cvernovka, the former Bratislava Thread Factory. It will be interesting to see how the developer rebuilds it. Omitted in the long term is also the so-called pink Cvernovka, Danubius. Also to be decided is the future of the enamel plant in Petržalka as high-rise buildings may be built there without any trace of the former Hungarian factory left behind. It will also be interesting to see what happens with the Winter Harbour (Zimný Prístav) on the Danube River. Unfortunately, in Bratislava many of the most valuable industrial monuments have been demolished.

TSS: On the map, for example, is also the Slovnaft refinery from the 1950s...

ML: Slovnaft is a huge industrial complex, which also defines this city. I’m not saying let’s protect it by law, but it’s an interesting industrial colossus, also in terms of technology.

TSS: Are some controversial buildings also on the map?

ML: A partially controversial engineering project is the SNP Bridge. This is also because the idea itself to lead intensive traffic across the town centre is very peculiar for various urban planners from abroad. To make room for the bridge many historic buildings were demolished. Yet the bridge itself is very well built. Also the former Závod Mieru (the Plant of Peace) known as the Dynamitka premises, which greatly polluted the environment, is controversial. Such ‘dirty’ premises are also part of the cultural memory of the city. Many of them are not as valuable as other structures, but a clever investor and a smart architect can also convert this heritage into something new and positive.

TSS: Are there also in Bratislava some successful conversions of old industrial buildings?

ML: Currently, for example, conversion of the original plant for production of pervious concrete in Bratislava’s Nové Mesto borough according to a design of architects from the GutGut studio. The original factory, paradoxically, is not at all an example of precious architecture, but the architects, together with the investor, decided to repurpose the building. A similar example is the old granaries in Jarovce, a project of the same architects. Also successful conversions of industrial buildings are Design Factory and Refinery Gallery. And of course we will see what will happen in the near future with Cvernovka, the brewery Stein and Jurkovič’s heating plant.

TSS: For whom was the map of technical monuments designed, who is the target group?

ML: Anyone who gets their hands on it. Actually, this is what our whole operation is about. We are trying to popularise places which no one pays much attention to. And we try to use language that everyone can understand. Abroad, such monuments are valued quite highly. The situation is also changing in Slovakia, but only gradually. We feel that what is missing here is greater attention and positive examples. So even these objects need to be promoted. It is also necessary to provoke fantasy in people in order that they can imagine what might be done with these buildings.

TSS: Why did you make the map bilingual, Slovak-English?

ML: From the very beginning we were resolved to make it also in English. The reason being that Slovak architecture is often more interesting for foreign visitors than for locals. For example, while some Bratislavans have a rather perplexed relation to the so-called bridging of the Slovak National Gallery, for people from abroad who are interested in architecture, it is an incredible building. So we also wanted to convey stories of these buildings to people who do not speak Slovak.

TSS: On the map there are also GPS coordinates or hashtags with the names of monuments. What do they serve for?

ML: Hashtags were the idea of the civic association, Club of Protection of Technical Monuments, which cooperated with us on the map. They thought that when people will go to see and take pictures of the buildings from the map, they would like to share them with us via social networks. As for the GPS coordinates, we received feedback that besides them there should also be names of the streets on the map where the buildings are located.

TSS: With what interest has the map met?

ML: The interest has exceeded our expectations. We printed 1,500 copies and these were sold or distributed within a week or two. But I have to say that it was before Christmas, when people were searching for presents. Nevertheless, we have already reprinted the map.