Rates may rise only marginally for some types of insurance, but others could increase by 15 percent or more, experts say. 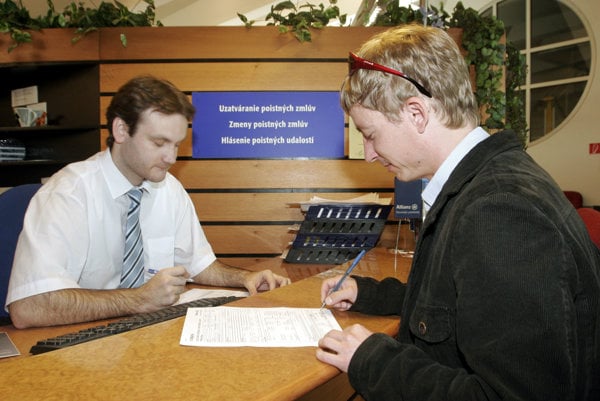 As of the beginning of 2017, prices of some non-life insurance products, mainly vehicle and travel insurance, have started to increase in Slovakia. Insurance companies are responding in this way to a new 8-percent levy that the state now applies to every new premium.

The Finance Ministry introduced an amendment to the act on insurance in late 2016 to boost revenues to the state budget as the sector had not been subject to taxes on such products before. However, economic analysts see only a small amount of new revenue flowing to the state budget, not even percentage points of total state expenditures, in comparison with the extremely negative impact the levy may have on the market. In the economy, nothing like a free lunch exists, says Róbert Chovanculiak of the Institute for Economic and Social Studies (INESS) think tank.

“If politicians increase taxes on certain products, either the consumer will pay them via higher prices, or the provider will provide the consumer with lower quality service,” Chovanculiak told The Slovak Spectator.

The new act extended the levy at a rate of 8 percent of the premiums that insurance companies receive from compulsory car insurance (PZP) to all sectors of non-life insurance: real estate, liability, travel, accident insurance products, among others. For example, clients who pay €100 per year for home insurance will send €8 of the sum straight to the state treasury.

Before the amendment was passed, the ministry estimated that the state could earn up to €80 million by introducing the 8-percent special levies to compensate for the lack of VAT in the insurance sector. The tax also is included in the prices of significantly more sensitive items like food, medical devices and drugs that people buy on a voluntary basis, said Finance Ministry spokesperson Alexandra Gogová.

“Not only in Europe, but elsewhere in the world it is quite standard to introduce other indirect instruments on insurance services,” Gogová told The Slovak Spectator, adding that the amount of the levy oscillates in various countries and sectors between 1 and 30 percent.

However, during the approval process of the amendment, the Slovak Insurance Association (SLASPO) argued that such a non-systematic solution will take part of insurers’ sales without a chance to take the costs into account similarly to taxes, and mainly will covertly burden their customers. The levy does not serve for rehabilitation of the insurance market or dealing with its problems, as opposed to the existing bank levy, said SLASPO’s general director Jozefína Žáková.

One of the most discussed negative impacts of the levy is the rise in costs of non-life premiums. Since the act came into force, Slovak insurance companies have started increasing the premiums for some types of non-life insurance products, PZP, travel insurance, liability insurance of employees and insurance for real estate and households, according to Maroš Ovčarik, executive director of the Finančný Kompas website.

“Some of the policies became more expensive only by a few percent, however, other premiums increased by 15 percent and more,” Ovčarik told The Slovak Spectator.

SLASPO does not consider the price growth to be revenge but rather a response. The new act on insurance obliges insurance companies to set premiums in a way to be able at any moment to meet all their commitments, said Žáková. Though Slovak customers are sensitive to price changes, such serious interference into the economics of insurance companies will be reflected in the prices in the near future.

“While the law has been effective for more than a month, we can only estimate that a potential increase will impact mostly non-life insurance policies like property, car accident and liability insurance,” Žáková said.

While Žáková argues that there are several factors that have caused price growth, Ovčarik sees the dominant factor to be the introduced levy. The insurance companies have not suppressed the rise in prices and some of them have justified the step for customers by citing the introduction of the levy, he said.

“Insurance companies strategically take into account all insurance stock and final pricing policy is a reflection of their current business situation and expectations for the future,” Žáková said.

There are options to deal with levies, include reducing profits, optimising activities by cutting costs or responding to competitors’ prices, according to Gogová.

At the last minute during the approval, the parliament narrowed the validity of the levy down to only new contracts valid from 2017. If anyone wants to replace an old contract with a new one, there will be a new price which takes into account the new levy. But existing customers can extend their current policies without the price being affected.

SLASPO considers such retroactiveness to be inappropriate, regressive and unconstitutional interference into the economy of insurance companies that could immediately send many of them into a loss, with subsequent consideration of abidance in the market. From the beginning, they have suggested that this change means a hidden tax which is ultimately directed to the customers, according to Žáková.

“The price growth will most likely occur sooner or later in all segments of non-life insurance,” Žáková said.

Fallout from the retroactive decision caused people who were planning to insure themselves in 2017 to do it to a greater extend at the end of 2016 when the tax was not yet collected, Chovanculiak said.

If the levy is reflected in increased prices, the situation will automatically lead to lower demand for insurance products and a subsequent increase in risks for many households, according to Chovanculiak.

Žáková points to the threat of stagnation and reduction of insurance coverage in Slovakia, adding that the government should even consider a possible increase in the number of people depending on the state as more may ask for state compensation in cases such as natural disasters.

“The motivational and educational role of the state towards citizens received a significant blow in the introduction of the levy,” Žáková said.