Despite lawsuits, the theatre does not plan to stop the production. It wants to present it at more schools instead. 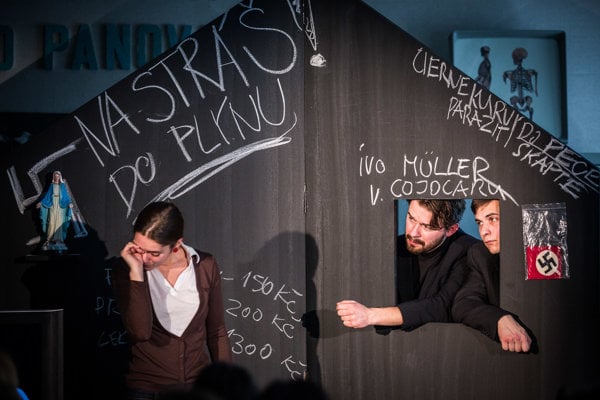 The Slovak National Theatre (SND) is staging a play whose aim is to show the impact of extremism to students. As well as the performance, they discuss with the students what they have seen, the Sme daily reported.

The performance titled “Natálka” is based on a real case from the Czech Republic. Back in 2009, a group of extremists attacked a Roma family with Molotov cocktails, leaving a two-year-old girl with 80 percent of her body burnt.

The play has already been challenged by the far-right People’s Party – Our Slovakia (ĽSNS), joined by ombudsman candidate Anton Čulen. He claimed the theatre may have committed the crime of defamation of nation, race and belief. He complained about a performance of the play at a grammar school in Pezinok (Bratislava Region).

The reason is that at one point a masked man writes fascist statements which are accompanied by a swastika. Moreover, in other scenes a swastika is covered by a statue of the Virgin Mary, the SITA newswire reported.

Čulen claims that the authors of the play belittled, humiliated and insulted the Catholic believers in Slovakia. He and ĽSNS MP Natália Grausová even wanted to visit the grammar school in Petržalka, where the play was performed, on February 13.

They were not however allowed to enter the premises, with Bratislava Region’s Governor Pavol Frešo saying that SND will also stage the play for the public in late February, Sme wrote.

When preparing the play, the SND collaborated with the civic association, Living Memory. It has opposed the ĽSNS accusations, saying it is not about belittling Christian thinking and feelings. It is a real story about an injured Roma girl, the destruction of a family by extremists and the fear of a mother, not the symbolism of the swastika, as reported by the TASR newswire.

“The theatre uses metaphors,” said Roman Polák, head of the drama section at SND, as quoted by TASR.

The theatre and the representatives of the Bratislava Region, however, consider it an effort to discredit the performance and scare off teachers.

The main objective of the play is to discuss intolerance and extremism with students and experts, according to Polák. It should also spread love and belief, as well as thinking about tolerance and the love of a neighbour. They want to continue staging the play.

Lawyer Pavol Nechala told Sme that the General Prosecutor’s Office should dismiss the lawsuit submitted by ĽSNS and Čulen.