GDP grew slightly less than in 2015, mostly due to lower use of EU funds.

After a drop in economic growth in the third quarter, the development in the final three months of 2016 exceeded some analysts’ expectations. Slovakia likely benefited from stronger domestic and foreign demand, though it struggled with investments which declined significantly after the boom caused by the need to use the rest of the EU funds allocated for the previous programming period.

Observers hope the situation will improve in the coming quarters, though there are some external risks that may hinder economic growth.

“The growth of Slovakia’s economy in the end of the year surprised us positively,” Ľubomír Koršňák, analyst with UniCredit Bank Czech Republic and Slovakia wrote in a memo.

The gross domestic product at constant prices increased 3.1 percent year-on-year in the final quarter of 2016. After seasonal adjustment, it rose by 2.9 percent y/y and by 0.8 percent compared with the previous quarter, according to the flash estimate published by the Slovak Statistics Office on February 14.

Economic growth for 2016 thus amounted to 3.3 percent y/y, a decline of 0.3 percentage points compared to the previous year. This was mostly the result of Slovakia drawing the remaining money from EU funds allocated for the 2007-2013 programming period. The lower amounts had the biggest impact on public investments, explained Slovenská Sporiteľňa analyst Katarína Muchová. 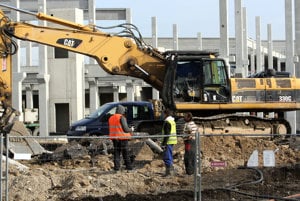 Though the Statistics Office will publish the detailed structure only on March 7, analysts already point to some factors that may have impacted the GDP growth. This concerns particularly an increase in both domestic and foreign demand.

“Mostly the household consumption posts positive results, due to the favourable development in the labour market – the drop in the unemployment rate; the increase in employment and real wages help increase the disposable income of households,” Muchová wrote in a memo.

Slovakia also benefits from the growth among eurozone economies, which rose by 0.8 percent quarter-on-quarter and 1.8 percent y/y in the final quarter of 2016, according to Koršňák.

On the other hand, the impact of investments was rather low, especially those in the public sector.

“Data continue to show a decrease in construction, a retreat from an exceptionally good 2015, as a result of less EU funds,” the Tatra Banka analysts wrote in a memo.

Koršňák, however, predicts that private investments may have grown in the 4Q compared with the previous quarter, which is indicated by bank loans.

The level of employment continued increasing in the end of the last year, growing from 2.4 percent y/y in 3Q to 2.6 percent in the last three months. After seasonal adjustment, the total employment rose 2.5 percent in annual terms and 0.6 percent in quarterly comparison, according to the Statistics Office.

“The numbers continue to be high compared to GDP growth,” the Tatra Banka analysts claimed. “This implies a slow-down in productivity growth, but could still be good news. It suggests that workers with lower marginal productivity, who were impacted most during the recession, are returning to the workforce.”

As for the increase in wages, it certainly exceeded the increase in labour productivity in 4Q 2016. The real unit labour costs continued growing for the third year in a row and “posted the longest uninterrupted growth period in at least the past 20 years," according to Koršňák.

Elections may endanger the growth

Analysts agree that the economic growth this year will exceed 3 percent. The economy will be positively impacted by domestic demand, particularly the consumption of households, but also the increase in net exports, according to Muchová.

Moreover, investments both in the public and the private sector are expected to restart, while also the restoration of European economies and the industrial sector will have a positive effect on growth, Koršňák added.

On the other hand, the growth may be threatened by several external risks, analysts agree.

“Certain risks arise from the slow global growth, the Brexit referendum and its potential impact on the euro, as well as the fragile growth in the eurozone economies,” Muchová wrote.

“Though we still expect that these elections will not change the direction of these countries significantly, the risk of the victory of political forces based on protectionism, which may contribute to further destabilisation of Europe, are not negligible,” the analyst added.

The potential victory of these anti-systemic parties in any of the countries would immediately weaken the economic sentiment across the EU and hinder or even halt economic restoration in Europe, Koršňák concluded.