Some food really is better in Austria, study finds

EC says its role is to monitor safety, not quality – but Slovaks want the same as Austrians, says minister.

The same orange juice on the shelves, but a different colour and even flavour under the microscope. This is just one of the revelations from recent tests of the same goods sold here and abroad, carried out by Slovak food inspectors. Though rumours have long swirled about differences in the quality of foods sold in Slovakia and its western European neighbours, there had been little hard evidence, until now.

The latest analysis, conducted by the Agriculture Ministry and the State Veterinary and Food Administration (ŠVPS), revealed that about half of the foodstuffs tested displayed significant differences in their composition. The agriculture minister says she will raise the issue at the European level.

“Customers expect the same quality from the same brand, regardless of the country of production or purchase,” Agriculture Minister Gabriela Matečná told a press conference on February 14.

However, she may face a problem, observers warn: European Union authorities are not much interested in the quality – as opposed to the safety – of food produced and sold across its member states. 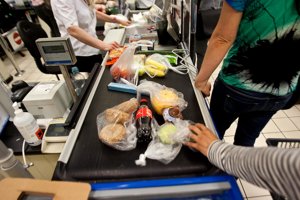 They picked various kinds of food, including dairy, meat and fish products, chocolates, baked goods, cheese and drinks. As well as checking the packaging, including information about the composition and weight in grams, they also analysed the colour, flavour and smell.

In their analytical tests, the inspectors focused on quality parameters like the content of meat, fats or proteins (depending on which product was tested), and additional substances (like sweeteners and colouring).

“Up to one half of the products contained differences that significantly impact their quality,” Matečná said. These were mainly, with respect to the products sold in Slovakia, a lower proportion of meat, and a higher proportion of fats, more artificial sweeteners and preservatives, and a lower weight in grams, she added.

Retail chain Lidl cast doubt on the selection of some of the foods analysed, claiming that in case of ham, the inspectors had not tested the same product. They bought braised ham in Austria, but cooked ham in Slovakia. The inspectors listed the ham among products with only little differences.

“It is unfortunate and misleading from the point of view of the customer to compare two different products,” Lidl spokesperson Tomáš Bezák said, as quoted by the Denník N daily. “We hope this happened by mistake.”

Other companies also disagreed with the findings. Wafer producer Josef Manner & Comp., for example, claims that the ingredients they use are the same for all markets, regardless of country or client, a member of its board of directors Thomas Gratzer told Sme.

The company has thus called on the Agriculture Ministry to publish records from the testing so that they are able to comment on the methods used and the results.

No obligation to sell identical products

Tests comparing the quality of foods sold in western and eastern Europe were carried out previously in 2011, commissioned by the Slovak Association of Consumers. It tested a selection of labelled food products purchased from supermarkets in eight EU member states: Germany, Austria, the Czech Republic, Poland, Slovakia, Hungary, Romania and Bulgaria. Among the selected foodstuffs were beverages, chocolate, pepper and coffee.

Those tests also confirmed that multinational companies typically vary the quality of the products that they ship to different European countries under the same brand. The only product that proved to be of identical quality across all the samples tested was Milka chocolate.

The European Commission, however, responded to the findings by saying that the accusations were baseless, and stating that multinational companies were free to adapt their products to different markets.

“Companies are under no obligation to market an identical product under the same brand in all EU countries,” said Frederic Vincent, spokesperson to for the then-commissioner responsible for health and consumer policy, John Dalli, back in 2011.

As long as EU legislation on labelling and safety is respected, products can differ from one country to another. As a result, companies can use different ingredients and sell their products at different final prices, Vincent explained.

The EC position on this matter has not changed, Ingrid Ludviková of the EC Representation Office in Slovakia confirmed to The Slovak Spectator in late October 2016.

“It depends only on food companies which products they place in markets within the EU,” she added.

While the EC is particularly careful about food safety, adopting various orders and regulations to ensure standards are observed, this is not the case for food quality, explains Peter Šimko from the Faculty of Chemical and Food Technologies at the Slovak University of Technology in Bratislava. It takes the position that it is up to consumers which foodstuffs they choose to buy.

“Thus, it is not interested in whether food quality in Slovakia or the Czech Republic is different from in other EU member states,” Šimko told The Slovak Spectator in October 2016.

There are several reasons why multinational producers sell goods under the same brand, but with varying composition in different markets. One is an effort to save costs and increase profits. As a result, they may try to use cheaper ingredients in products sold in central and eastern European countries, Šimko explained.

“Customers in eastern Europe are not as mature [as western ones],” Šimko said, explaining that multinational producers are well-informed about Slovaks’ shopping mentality and purchasing power, and adjust their sales strategies to this.

He stresses that food quality is, however, much better than it was at the beginning of the millennium. While it dropped significantly after the state passed responsibility for the quality of foodstuffs to producers, it started increasing in the early 2000s, due to an increase in competition between big retail chains, Šimko explained.

Some producers defend the differences in the composition of their foodstuffs by saying that it is important to state the details on the packaging. Moreover, they say, they need to meet the expectations of their customers.

“Food producers need to meet the demands of customers with their products, as their ambition is not only to produce food, but also to sell it to customers who will be satisfied and will return to buy it again,” Jarmila Halgašová of the Food Chamber of Slovakia told The Slovak Spectator.

As a result, small producers as well as big multinational companies often change the composition of food to meet the demands of customers in various countries, she explained.

However, Matečná says that the claim that consumers prefer various regional tastes no longer stands up to scrutiny.

“Slovak consumers certainly do not expect artificial sweeteners and colouring, more preservatives or a lower share of meat than Austrians,” she added.

The ministry says it plans to continue monitoring and testing products made by multinational companies that are sold in shops here. Moreover, together with other countries from central and eastern Europe it intends to continue discussion of the variable quality of foodstuffs at the EU level.

“The EC may oppose it because there is big pressure from multinational companies,” Matečná said, “but we have a single European market and a single consumer, so it is incorrect to create two groups of consumers.”

Meanwhile, it is also important to raise awareness, say observers. Consumers should realise that it is they who ultimately decide which foodstuffs are offered in the market, said Šimko.

“Boycotting certain products is the only way to ‘persuade’ producers that the Slovak market is at least as good as any western one,” he added.