The presidency will also be scrutinised by state auditors.

The National Criminal Agency (NAKA) will scrutinise the cultural events that were held during Slovakia’s six-month Presidency of the EU Council, including the overpriced logo presentation.

The first reports about the scandal, involving the organiser of the event agency Evka, appeared already in November 2016 after former Foreign Affairs Ministry employee Zuzana Hlávková went public with the information.

NAKA will now focus on potential “suspicion of committing a crime of violating duties when administering someone else’s property”, the Sme daily reported.

Elite police officers launched the investigation on their own initiative, based on the monitoring of media that reported on the scandal with the overpriced presidency logo presentation. The agency Evka, which organised the event, spent €156,000 on it, according to the reports.

The Foreign Affairs Ministry picked the agency directly after its own market research, without any competition. It has not yet specified the names of two other firms which it had allegedly addressed during research.

The cost of the event later rose to nearly €250,000. It was revealed that the ministry paid separately for renting the premises of the Slovak National Theatre and also for rewarding artists. These costs had originally been part of the contract with Evka. Hlávková says that the actual cost of the event was as high as €300,000, Sme reported.

NAKA investigators are currently hearing the people involved. It is not clear who has been invited for talks.

“Regarding the ongoing investigation it is not appropriate to comment on the current and planned operations and their results at the moment,” the press department of the Police Corps president’s office told Sme. 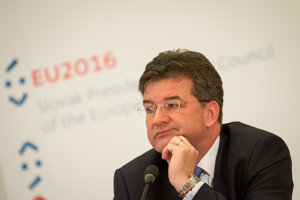 Read also: MPs will not investigate use of Evka agency Read more

Some people have already been heard

Before NAKA took the case, Hlávková had been invited to be heard by police on January 10. The police officers interrogated also Pavol Szalai, another former Foreign Affairs Ministry employee, who confirmed Hlávková’s claims.

“I was there for four hours,” Hlávková said, as quoted by Sme, adding that she repeated the whole story and answered some additional questions.

The police officers were interested in the actions of former head of private broadcaster TV Markíza Zuzana Ťapáková, who came to the Foreign Affairs Ministry as an external consultant. Hlávková claims that after her arrival events started to change and prices began to increase.

Meanwhile, the Supreme Audit Office (NKÚ) will also check the financing and events of the presidency this year. It plans to launch an investigation in early March, focusing on three areas: the system of securing the preparation and organisation of the whole presidency, the procurement of goods and services, and the usage of money, Sme reported.