Woman who urinated on the Quran arrested, awaiting trial

Some observers believe the video might lead to increasing security risks for Slovakia. 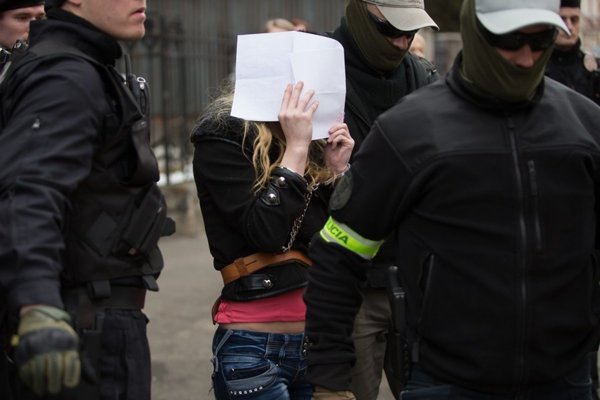 A POLICE unit arrested a young woman in the northern-Slovak town of Ružomberok for her display of internet hate crime.

The new provisions in the Criminal Code to face extremism-motivated crimes have been effective only since the start of this year but they have already been applied in the case of a French exchange student who had been beaten in Banská Bystrica, and in the case of a young woman who recorded a video in which she among other things, burns the Quran.

These cases now fall under the scope of the work of a special police unit the National Criminal Agency (NAKA), the Specialised Criminal Court and the Special Prosecutor's Office. The woman from the video could end in prison for up to six years for her deed. Meanwhile, some security analysts agree that her video might have increased the security risks for the country.

Sheila Szmereková, who previously went by the name Adriana Meleková (and has two Facebok profiles, one for each of her names), recorded and published the video in mid-December 2016 but it only attracted wider public attention after she created a Facebook event, around February 16, for people who support her.

The event however never took place because on February 17 NAKA arrested her and charged her with the crime of producing extremist materials and the crime of violence against a group of citizens, defamation of race and confession and incitement of hate based on nationality, race, and ethnicity.

In the video, Szmereková, standing in an outdoor location in front of a Slovak flag, first presents a book entitled The Quran (in English). She then proceeds to tear pages out of the book, throw them on the ground, and finally sets them on fire. She also urinates on the pages of the torn book, all the while giving a hate speech against Muslims whom she labels parasites.

The tabloid media have publicised the problematic background of the 24-year-old woman. She reportedly lived with her mother in a poor community in the northern Slovak town of Ružomberok, where she was allegedly raped by a group of men at the age of 14. Later she was staying in a resocialisation facility where she was reportedly impregnated under unspecified circumstances. Her child, who is now seven years old, lives with a professional family.

On Sunday, February 19, the judge of the Specialised Criminal Court ruled for the woman to be taken into custody. Both the accused and the prosecutor filed a complaint against the ruling.

Well-known blogger Jan Benčík who won last year’s White Crow Award for his fight against extremism and fascism, reacted on his blog where he regularly exposes hate speech of Slovak extremists on social networks and blogs.

In his text on the blog of Denník N from February 18, Adriana’s public blasphemy and reactions to it, Benčík summed up the reactions of extremists, who have in the meantime labelled her the Joan of Arc of the 21st century. Benčík however also noted that it was positive to read that many, even some of the LSNS supporters disapproved of Szmereková’s conduct.

Benčík in the text of his blog also pointed to the fact that she also offended the Slovak national flag, which she used as the background for her performance.

“Since the Slovak flag was in the background all the time, she linked it with her disgusting exhibition and thus exposed Slovakia and its citizens to real danger,” Benčík wrote. He noted that the video has been seen by over 147,000 people and it has also received attention abroad.

Analysts voiced the opinion that the video might pose a security risk for Slovakia to some extent, especially if it brings about a wave of similar endeavours among Szmereková’s supporters.

Expert on rightist extremism and radicalism Tomáš Nociar however believes it to be too alarmist to present the video as an increase in security risks in the country, "mainly in the context of the fact that in almost every European country we could find examples of similar excesses".

The new provisions in the Criminal Code to face extremism-motivated crimes have been used for the first time in the case of the beating of a foreign student in a bar in Banská Bystrica. A man aged 31 and identified as Peter P. from Banská Bystrica, who attacked a French student aged 20 on January 12 in a night club, has been charged by the National Criminal Agency (NAKA) investigator with bodily harm and rioting, the Sme daily wrote two days later.

Spokesperson for the Police Corps Presidium Denisa Baloghová confirmed that the motivation for the attack was the skin colour of the injured man.

“This is the first case of the crime of extremism when the prosecutor of the Special Prosecutor's Office (ÚŠP) has filed a proposal for pre-trial custody since the new legislation has become effective,“ spokesperson for the General Prosecutor's Office, Andrea Predajňová, said.

On February 20, Justice Minister Lucia Žitňanská defended the new set of Criminal Code rules in her op-ed for Dennik N she wrote that we should not turn extremists into victims.

“For crimes to be classified as racially motivated, it is no longer necessary that there is an actual, but also perceived belonging of an individual or individuals to some race, nation, nationality, or ethnic group,” Žitňanská wrote.