Fico would like to obtain some influence in Košice steelmaker

The European Commission imposed definitive anti-dumping duties on import duties on some steel products from China. 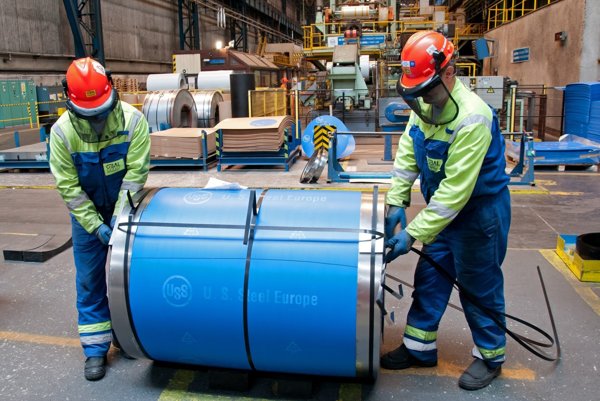 After more than 16 years, U.S. Steel is likely to definitively quit Slovakia. This time, the Slovak government of Robert Fico has not offered the American owners any stimuli to stay in Košice like back in 2013. It only states that U.S. Steel is a private company and thus it does not have any instruments to prevent the sale of USSK. Nevertheless, PM Robert Fico reiterated several times that the government would like to obtain a share in the biggest employer in eastern Slovakia.

The potential buyer is the Chinese steelmaker Hesteel Group. It is rumoured that it will pay €1.4 billion for the Košice-based steel-making operations, U.S. Steel Košice (USSK). But it is estimated that the Košice plant employing about 10,000 people suffers from large investment debt and that the new owner would need to investment at least €1 billion to make it competitive on the market.

Read also:U.S. Steel: Will they stay or will they go? Read more

“Americans have been openly talking about the sale of USSK for two or three years,” said Boris Tomčiak, analyst of Finlord told Pravda. “Today they have an ideal opportunity to do so due to increasing steel prices and the growing profitability of the plant. My opinion is that in the end they will decide to focus only on the American market and sell USSK.”

Tomčiak believes that the strategic decision concerning the sale of USSK will affect the corporation for the next five to 10 years.

Over the last few years American as well as European steel makers have been crushed by imports of cheap Chinese steel. The USA as well as the EU have imposed import duties on some steel products from China.

Europe imposed the latest at the end of February. The European Commission imposed definitive anti-dumping duties of between 65.1 percent and 73.7 percent on imports of heavy plate non-alloy or other alloy steel from China on February 28, confirming provisional tariffs set in October, Reuters reported.

The EU executive said it acted after an investigation found Chinese companies to be heavily dumping their products on the EU market by selling them at well below half of the price on the producers’ home market.

“The Commission has responded forcefully and quickly to unfair competition, while at the same time ensuring that the rights of all interested parties have been protected,” the Commission said in a statement.

Eurofer, which represents the European steel sector, said the EC had found clear evidence of dumping.

“Tens of thousands of steel jobs have been lost in Europe over the past few years, and dumping, particularly demonstrably from China, has been one of the causes,” it said in a statement as reported by Reuters.

In China, the overproduction of steel is estimated at 400 million tonnes annually. The EU countries consume annually about 150 million tonnes of steel. Thus for the Chinese steel giant Hesteel Group, the purchase of USSK may be a chance to keep European consumers also after duties are imposed, Pravda wrote.

Richard Turcsányi from the Institute of Asian Studies believes that for China it is interesting to own a profitable steel mill abroad.

“Thanks to it, the parent company may earn on steel production, avoid the need to import Chinese products via European protective instruments and simultaneously contribute to improvement of air pollution in China,” Turcsányi told the Sme daily in late January.

While the corporation as a whole reported a pre-tax loss of $165 million in 2016, U.S. Steel Europe, which is now comprised solely of USSK, registered pre-tax earnings of $185 million, the U.S. Steel website states.

“Published results prove that the Košice plant was built in the right place, has good production and excellent workers,” Slovak businessman Peter Kamarás told Korzár. Kamarás negotiated the sale of the Serbian steelmaker to Hesteel. “It [Košice plant] will be a golden egg for anybody that will want to invest into it.”

The Slovak government is informed

The Slovak government is informed about the plans of the American owners as well as the potential Chinese buyers.

On February 13, Economy Minister Peter Žiga, Vice PM for investments and informatisation Peter Pellegrini and Finance Minister Peter Kažimír met with representatives of USSK to discuss the future of USSK. The meeting took place on the basis of the memorandum from 2013 based on which the government gets regular information about the situation and development in USSK, the TA3 news channel reported. The government refused to give details about the talks. But Žiga said that the promise by USSK that the Slovak government would participate in talks about the sale of USSK is still valid. Allegedly, also potential Chinese investors attended the meeting.

“We will protect strategic interests of Slovakia and the Košice region and we insist on keeping the employment and production of steel in Košice, regardless of who the owner is,” Žiga told TA3.

After a meeting of coalition parties on February 21, PM Fico said that the state has no instrument to prevent the American owners from selling USSK, but that the state cares about good cooperation with a possible new owner.

“If the Americans shake hands with any new owner, we want to sit there and say: we want to agree with you upon this, this and this,” said Fico as cited by the SITA newswire. “Maybe we will also open the question: Will you let us in? Maybe we will want to have somebody in supervisory bodies; we will want to speak with the new owner about the future operation of the plant.”

Finance Minister Peter Kažimír (Smer) said in reference to talks with representatives of U.S. Steel, the state and potential buyers after his working visit to Košice on February 24 that the ownership change at Košice steel mill could represent a new and positive development for the city. Kažimír specified that the state carries out the role of an intermediary between the Košice region and the steel mill’s existing and potential future owners. He added that the government is kept informed about unfolding developments regarding the sale.