In this postcard from 1902, we see three elderly men courting a young lady. Considering their clothes, this situation might have happened at some festive event, maybe a ball. 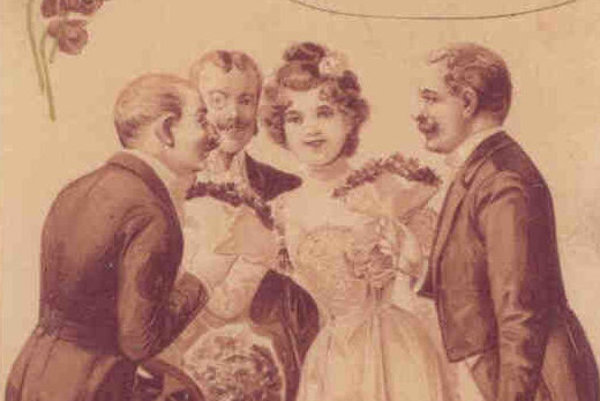 Balls used to be popular in Bratislava and elsewhere. (Source: Courtesy of B. Chovan)
Font size:A-|A+2

And if the purpose of the event was ballroom dancing, then it would have taken place in winter, as this was the typical time for organising balls.

Balls came here from France but dancing events belonged to the social life of cities much earlier.

When Prešporok (as Bratislava used to be called earlier) became the Hungarian coronation town in the 16th century, many Hungarian top nobles moved here. In splendid palaces, the nobility often had celebrations, including dance events.

Balls stood the highest in the hierarchy of dance events. They were opened by professional dancers with ceremonial dances and their number helped evaluate the class of the ball. Prešporok balls used to be pretentious, often visited by hundreds of guests, including some from Budapest or Vienna.

However, less aristocratic classes used to organise balls, too. Among the popular ones were the balls of washer-women, choirs, sole tradespeople, and also railwaymen.

Later, the political situation started to be reflected at the balls ever more and more. And it was all rosy; during World War II, for example, people could dance at the ball of the Hlinka Guards (the armed vanguard of the fascist Hlinka party) and after the war, Jewish and Czech balls were on the decline. The hard post-war economic situation finally caused this type of social entertainment to disappear for a period of time. Maybe this type of event was superfluous for the masses in the era of building a better future – during communism.