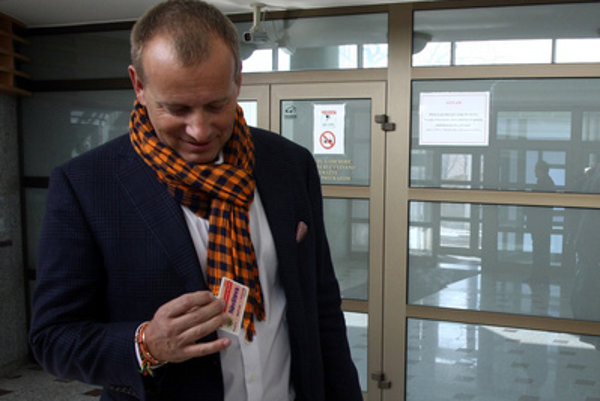 Controversial businessman Marián Kočner met with the Čistý Deň co-founder Zuzana Tománková Miková, to inform the media that an unnamed opposition politician was involved in lewd communication with a minor from the centre.

Accusations of immoral behaviour regarding a 15-year-old drug addict resident of the resocialisation centre in Galanta (in Trnava Region) are nothing but a campaign to discredit me, opposition We Are Family party leader Boris Kollár told a news conference held in parliament on March 8.

Kollár, who conceded that he was in contact with the girl in question but claimed that he did not know how old she was or that she was from a resocialisation centre, as quoted by the TASR newswire. He accused Smer lawmaker and Prime Minister advisor Erik Tomáš, Prime Minister Robert Fico and Kočner of creating a smear campaign. He alleges that Smer is worried about criticism and thus it is striving to cover its own scandals with other accusations.

As evidence, Kollár showed a photograph that was taken in the Bratislava-based Crowne Plaza hotel at 9:15 on March 8, i.e. before a press conference given later in the day by Čistý Deň co-founder Zuzana Tománková Miková, who claimed that an unidentified opposition MP had engaged in lascivious and lecherous communication with a centre’s resident.

“She consulted this campaign to discredit me with Marián Kočner and [former Slovak Intelligence Service counterintelligence director and journalist] Peter Tóth,” Kollár said for TASR. ”This is exactly a game played by Robert Fico, Erik Tomáš, Marián Kočner and Peter Tóth via Ms. Tománková.” The opposition MP added that he does not believe in coincidences. He denies the accusations and sees nothing wrong with the fact that he likes women and flirts with them.

“I love women,” he admitted. “I keep correspondence with thousands of people, mostly women, I admit that. If they ask me about politics, we discuss politics. When they flirt, I flirt with them…. I have five children from exactly such communication. I’m not hiding it. And this young lady flirted with me, so I flirted with her, but I see no crime in it,” Kollár summed up.

Kollár claimed that he did not contact the girl first and that it was always her who contacted him except in one case when he learnt that she was missing on a social network. He asked her whether she was okay, and she replied that she was. The MP claims that he has never met the girl, that he did not know how old she was or that she was a resident of a resocialisation centre.

The We Are Family leader added that if Tománková Miková was referring to him and his communications with the girl in her accusations, then she lied about those communications. He provided what he called a transcript to the media. “I’ve nothing to hide," he stressed, adding that he was warned that a campaign to discredit him was being prepared three weeks ago.

The case is under police investigation, according to Tománková Miková. Kollár has not been questioned yet. Police want him to testify as a witness, he said, adding that he will provide the police with anything that they want from him. He added that the ruling Smer party is behind the whole case.

The Government Office strictly refused Kollár’s accusations, as quoted by the SITA newswire, and deems the whole case a desperate attempt at diverting attention from the core of the issue – which is immoral behaviour towards a minor.

The opposition originally pointed to the allegations against Čistý Deň. Although the Accreditation Commission recommended that Labour Minister Ján Richter should strip the facility of its licence, he did not do so, stating that he saw "no facts or conditions that would legally justify the withdrawal of the licence".