There are 203 small hydropower plants in Slovakia producing less than 3 percent of consumed energy. 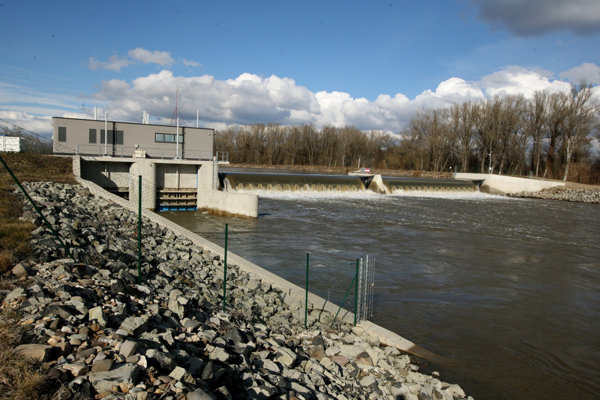 The surroundings of a ranch in the Nový Tekov village are serene this time of year. The weather is still cold and prevents children from using the local playground. Instead, they make fun of a young pony that desperately tries to pull a branch through a fence, but constantly fails.

The ranch is conveniently placed between Nový Tekov and Starý Tekov villages and divided by the Hron river, yet visitors may get the impression that they are somewhere at the edge of a forest. The heavy sound of the Hron strengthens this impression.

After moving closer, however, it is clear that the sound is not created by waterfalls or natural whitewater, but the Small Hydropower Plant Tekov (MVE Tekov). Locals have gotten used to the sound. When asked about it, many of them are unaware of the odd way in which the investor named MVE Tekov was allowed to build the plant that has been active since 2014.

A few years ago, the Environment Ministry, together with local authorities, did not see any reasons for assessing the structure’s impact on the environment. They refused to carry out the process even though MVE Tekov is the third of such plants in the area. Moreover, Mochovce nuclear power plant (EMO) warned officials that the slowed stream of water could not sufficiently filter EMO’s wastewater, including radioactive Tritium, which is released into the river.

“Investors come prepared, while citizens are usually surprised and unable to respond as promptly as they should,” Mario Urbanec of Nový Tekov who organised a petition against MVE Tekov told The Slovak Spectator. “They always have the advantage; this is how it is going here.”

This is just one example of numerous firms that have appeared in Slovakia over the last few years and build small hydropower plants that, when not professionally built, endanger the environment and make life more difficult for people living nearby. In total, there are 203 small hydropower plants in Slovakia of various sizes, and there are at least 15 constructed or planned MVEs which have received a permit in a suspicious way, according to a report by Ombudswoman Jana Dubovcová published on March 9.

“Unprofessional and, in some cases illegal proceeding of public administration organs have resulted in insufficient assessment of the structures’ impacts on the environment and subsequently in decreased quality of the environment and biodiversity,” the public rights defender writes in her report.

Small hydropower plants have been doing good business for years. Investors can get EU funds to construct them, the state then procures the permit, and later on, even buys the energy produced in a guaranteed way. It is enough just to learn about it in advance, according to approached experts. 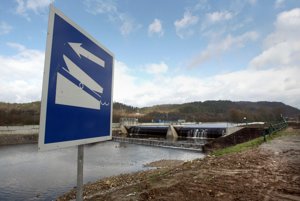 In 2003, a different investor wanted to construct an MVE in Nový Tekov. The Environment Ministry decided that the planned MVE should undergo an environmental impact assessment (EIA) process which is stricter than standard assessments by various offices, while also relevant institutions have the possibility to comment on it.

The ministry then respected the objections of activists that another MVE in this section of the Hron river would create a cumulative barrier effect which would impede the migration of fish. An MVE would also slow down the river's current, thus hindering its self-cleaning ability.

“The character of the river changes totally, the water stops being filtered, the pollution rises and the fish are not able to reproduce,” Martina Paulíková of Slatinka environmental NGO told The Slovak Spectator.

Slovakia’s largest electricity company Slovenské Elektrárne (SE) which owns EMO, also demanded an assessment of the fact that the water would be dammed and may not be able to filter and clean EMO’s wastewater.

The investor subsequently withdrew and the MVE slot remained open for other firms.

When MVE Tekov introduced a similar project, the ministry changed its behaviour. Despite similar objections against the new MVE proposal, the ministry saw no reason to assess it via an EIA process.

“This is sick. The impact of such a power plant on the environment should always go though the EIA process,” Urbanec says. “And this should apply not only to individual projects but to all power plants on the river because their impact is cumulative.” 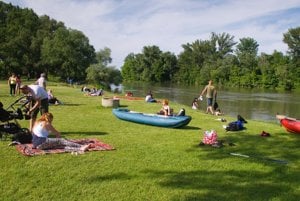 Moreover, the comments by SE are lacking in the ministry’s official decision and the ministry fails to explain why it did not ask the company about its opinion.

On February 18, 2010, the Nový Tekov municipality established the site of the power plant. One day later, MVE Tekov got a permit for its construction.

“This deserves our attention,” reads Dubovcová’s report “None of these documents contain argumentation or deal with these objections and comments.”

The municipality granted a permit to MVE Tekov because at the time no one was able to assess how EMO wastewater would affect the environment, according to Nový Tekov Mayor Ladislav Nagy.

The process was too fast. An environmental activist cannot participate in every municipal meeting or check the board in the local office on a daily basis, therefore, they did not learn about the project, according Urbanec.

Both Nový Tekov and Starý Tekov villages, SE and MVE Tekov, claim that the water in the Hron is checked regularly and the amount of tritium in it is not at a dangerous level.

After meeting with Dubovcová and learning from previous experiences, the ministry is preparing new rules for the entire process, according to Ferenčák.

The reason why Slovakia has 203 active MVEs is that they are subsidised and have the purchase of energy secured for 15 years, according to Martin Vlachynský, INESS think-tank analyst.

The Regulatory Office for Network Industries (ÚRSO) ruled in May 2015 that the price for this type of energy will be €90.12 per Megawatt-hours until May 2029. The current price on the market is just €30.35.

“It motivates businessmen to construct power plants even on water courses with small potential which would be nonsense from an economic point of view,” Vlachynský told The Slovak Spectator.

Aside from the 203 existing MVEs, the state has planned to use 375 other river areas for their construction. In 2016, the government has re-evaluated the whole plan and pointed out only 58 areas. This could slow down the boom of MVEs.

Investors may also be discouraged by the recent government’s decision to not plug renewable energy sources into the network. However, the amount of purchased energy from MVEs has not been showing such a trend so far, according to Matúš Zelený of Krotitelia energií, the energy-focused news portal.

MVEs produced 2.3 percent of consumed energy in 2013 and if all possible river areas were occupied by them, they would produce around 3 percent of energy, according to Vlachynský.

This makes the entire MVEs concept useless, according to Ondrej Matej of the Institute of Transport and Economy think-tank.

“It is not worth the interventions in the environment,” Matej told The Slovak Spectator. “We have such power plants here only because several officers learned that eurofunds flow through them.”