The best football player is Hamšík

Six time winner says he is glad he can spread the good name of Slovakia abroad. 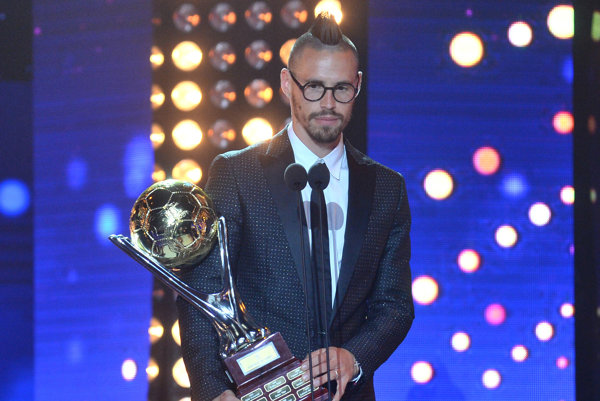 Captain of the SSC Napoli club Marek Hamšík is the best football player in Slovakia for the fourth time in a row. Captain of the Slovak national representation team Martin Škrteľ placed second, while Róbert Mak was third.

It is already Hamšík's sixth title. Škrteľ, who is his usual rival in this competition, has four titles, while former representative Dušan Tittel has won three times, the SITA newswire reported.

“It was my best year in my career,” said the midfielder in an interview with the Sme daily.

Hamšík said he appreciates the title and thanked his wife and three children for the successes.

“I have to make new resolutions,” he told Sme, adding he must not be satisfied with what he currently has.

As for the past season, Hamšík highlighted the EURO championship in France, as well as the successes of his SSC Napoli team, which made it to the best 16 in UEFA Champions League where they were defeated by Real Madrid.

Hamšík scored 109 goals for SSC Napoli. The only player with a better score is legendary Diego Maradona, who scored six more. When asked whether he plans to break the record, Hamšík said he is not a forward, so it may not happen anytime soon.

He considers it more important to achieve successes with his club and Slovak national representation.

“I would like to win a league title,” Hamšík told Sme, adding he would like to achieve it with his current team. In such a case, they would have to defeat the most famous Italian team, Juventus FC from Torino.

When asked whether he notices that his name is often linked with Slovakia abroad, which makes him one of the best known Slovak athletes abroad, together with cyclist Peter Sagan, Hamšík said he is glad they positively represent the country.

“I am glad I can spread the good name of Slovakia abroad, but I haven't caught up with [Peter] Sagan,” Hamšík responded when asked whether he perceives if he and the Slovak cyclist belong to the best-known Slovak athletes in the world.