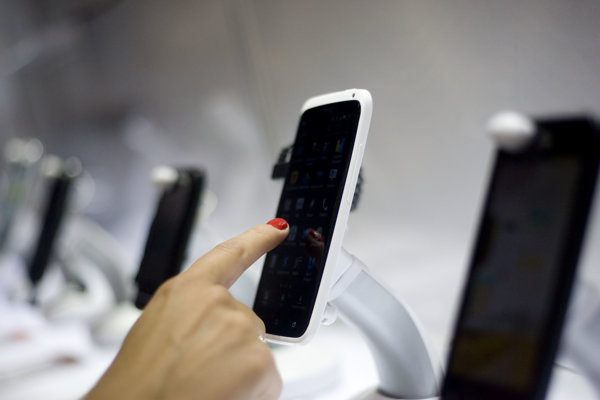 The use of smartphones is on the rise. (Source: SME)
Font size:A-|A+

Smartphones offer applications that facilitate all aspects of life. In recent years, banking applications have changed from high-tech features to ordinary services, that help banks keep in touch with the young generation of clients.

“The essence of banking applications is to offer the client an overview of his account balance and transactions, and the function that enables making payments,” said Lukáš Kosno, editor at the website zive.sk.

Such functions have been available for long via internet banking, but applications put them on a new level, easing access and orientation.

“Currently, 30 percent of the internet banking users at VÚB log into their account from a mobile phone,” said Mária Horecká, head of the e-business department at the bank.

Some banks even offer applications that can replace a bank card with NFC technology, which enables contactless payments.

“The mobile phone becomes a fully functional wallet,” said Kosno, adding that the only conditions are a compatible operating system and the option of touch payments in shops. “At the same time, you don’t have to turn on a computer; account access is available in a few seconds anywhere with a mobile phone.”

Horecká confirmed that transferring a large part of typical banking operations into the online space improves the quality and effectiveness of the bank’s branches.

In February 2017, VÚB introduced new practical innovations to its applications. Wave2pay is an application for payments directly by mobile phone, replacing the bank card.

“The transaction is executed by touching the mobile phone to the POS terminal,” explained Horecká.

Rising mobile banking usage has also been marked in the rest of Europe, where clients are using mobile phones for faster and safer payments.

“We are trying to bring to clients modern payment methods that speed up the process and are more comfortable than cash payments,” said Horecká.

Tatra Banka has been recognised as one of the the biggest innovators, as it constantly adds new features to the mobile banking options. Recently, the bank added payment reminder to the Viamo application.

“The most widely used functions are the account balance view, overview of orders and payment set up,” said Zuzana Povodová, spokeswoman of Tatra Banka. Clients also use the separate applications for Spending reports and mobile phone withdrawals.

Slovenská Sporiteľňa offers two separate mobile banking applications, depending on whether clients want to have only a passive overview of the transactions, or also be able to execute payments.

“We are trying to customise the control and comprehensibility of the application to access information quickly, with a few touches,” said Branislav Jarábek, head of the electronic banking department at Slovenská Sporiteľňa.

SmartBanking by ČSOB also offers the option to execute a special payment on a mortgage, set up a standing order, find out the exchange rate or locate the nearest cash machine. The application has more than 80 functions and clients can carry out even more complex operations, specified Anna Jamborová, the spokesperson of ČSOB.

“Some banks have the advantage that part of their corporate group is also an insurance company and they can interconnect internet banking with insurance services,” said Kosno.

The number of users of ČSOB SmartBanking has doubled in the last two years, ranking it amongst the applications with the highest penetration of users of the client portfolio in central Europe.

“The majority of clients are from the 22 to 46 age group, but clients over 80 are not an exception, either,” said Jamborová.

The number of the Mobile Banking users at VÚB is also growing rapidly, while the increasing number of users puts greater demands on their security.

“I do not see any special risk in using banking applications,” said Kosno. The data is protected by PIN code, lock pattern or fingerprint login. “However, the degree of security might differ between banks,” he pointed out.

Banks claim that security is their top priority. They employ the latest technologies at different levels to combat potential threats. For example, at Tatra Banka, communication between the mobile device and the bank is encrypted.

“All information is verified on the server and there is no information in the application that could enable a potential attacker to access the four-digit PIN code,” said Povodová.

Apart from that, the user can set limits on withdrawals and at their request the bank can restrict some of the operations.

“The problem is that a criminal can take the log-in information for the application or get it from a client by using log-in form, which can be displayed on the mobile phone screen,” explained Kosno.

To protect against online threats, banks recommend not downloading any suspicious application or applications from unknown sources.

Moreover, Slovenská Sporiteľňa advises their clients to update their operating system, be aware of the programmes they install and log into the banking application only in secure locations.

“When accessing the banking applications, we advise clients not to use public Wi-Fi networks, to set up an automatic lock in the mobile phone during inactivity, and protect IT devices with up-to-date antivirus programme,” said Jarábek.

To be absolutely sure, clients should call the bank and deactivate electronic banking in the case of potential attack, advised Kosno. Later, they can activate it on another device.

Internet bank Zuno was named the best banking application in 2016. Unlike other banking applications, with Zuno clients could even create a new bank account online. However, Zuno left the Slovak market in late-2016 after its mother company decided to shut down the online branches in order to simplify its structure and do away with duplicate activities. Raiffeisen Group controls Tatra Banka bank in Slovakia and Raiffeisen bank in the Czech Republic, which will take over ZUNO’s clients.

Nevertheless, Kosno does not think that mobile banking applications will significantly affect the operation of brick and mortar branches.

“The effect was already caused by the arrival of internet banking,” he said, adding that it resulted in reduction of banking staff.

“Mobile applications just replace internet banking, but for the more complex operations people will still go to the bank in person,” Kosno explained.

VÚB will continue developing their Mobile Banking, in order to facilitate the everyday contact between the client and the bank.

“The same applies to the Wave2Pay application, which will get visual and functional updates,” Horecká confirmed, adding that filtering the basic functions into the applications enables the brick and mortar branches to focus on consultancy and personal service.

“The current rate of development suggests that the popularity of mobile banking and customer demand will grow in line with the improvements in quality and price affordability,” said Jamborová. Such applications are expected to spread among watches, bracelets and glasses.

“Changes will also take place in the field of security, with further utilisation of biometrics and other innovative security elements,” Jamborová said.

“Current applications provide only an overview of the investment,” said Kosno.

In the future, banks should offer applications that will enable the management of mutual investment funds. However, he is not sure whether the mobile phone interface is suitable for this type of operation.

“For a mortgage, people will still prefer a personal contact in a bank,” Kosno concluded.