Fico: I cannot see another living space for Slovakia than EU

After the Rome Declaration was adopted unanimously at the ceremonial summit of 27 European-Union member states in Rome, Slovak Prime Minister Robert Fico said that it has made it clear that the Union wants to carry on united. 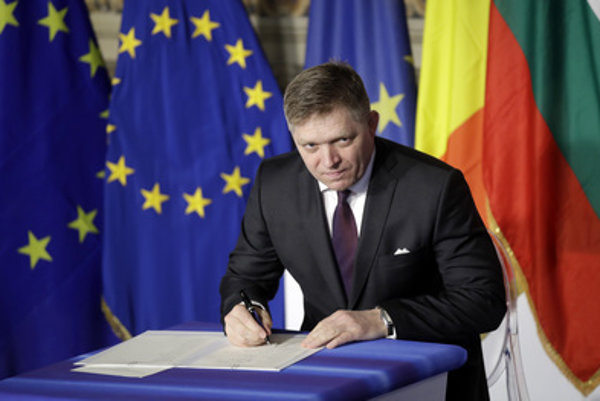 “I do not see any other living space for Slovakia than the European Union,” he said after the adoption of the Declaration on March 25, marking the 60th anniversary of the Treaty of Rome, adding that anyone claiming that Slovakia would be able to survive as a neutral state is lying. “So, as long as I’m prime minister, I’ll continue doing everything possible for Slovakia to be viewed as a trustworthy partner in this unique project,” stated Fico, who participated in the summit, as quoted by the TASR newswire.

The Rome summit took place 60 years after the Treaty establishing the basis of European Union was signed there. The so-called Bratislava process, started last year at a summit in the Slovak capital, should be completed at this summit, pinpointing the main challenges and threats of the current EU: i.e. more integration, but with different speeds for individual member states as the main vision for the future, the Sme daily wrote.

“It’s very dangerous to go at European institutions like a bull in a china shop,” Fico continued to say, according to TASR. “Nobody is claiming that they’re perfect, but we don’t have anything more perfect. We should realise that Europe is probably the best place for life worldwide. It’s an oasis of peace and security.”

The Rome Declaration highlights certain points of an agenda for the EU’s future that must be focused on, according to the Slovak PM. “This primarily means a safe Europe, a Europe experiencing strong economic growth and a Europe that will again be the world’s best and wealthiest region,” said Fico, adding that the document also stipulates the EU’s role as an important global player and a “space for strong social policies”.

The signing of the Treaty of Rome establishing the European Economic Community 60 years ago marked the beginning of unprecedented cooperation, eventually connecting Europe’s West and East in the European Union and doing away with boundaries between European countries, Slovak President Andrej Kiska wrote on a social network on the same day, adding that it has not been easy seeing such a significant shift. “However uncertain and complicated the current situation in the EU might appear and regardless of our opinion of further integration... we cannot throw away these 60 years in the name of petty disputes and dubious political interests,” the president wrote, as cited by TASR. “It’s the duty of our generation to resolve the challenges that we’re facing, maintaining the European project of peaceful cooperation in good condition and sound health,” added Kiska, who was not present in Rome but rather attended domestic events.